The tape drive and media business shrank by a quarter in 2009. At this rate it could enter irrelevance in a few years time.

Tape market tracking organisation the Santa Clara Consulting Group said (pdf) tape drive and media sales represented a $1.58bn market in 2009, down 25 per cent from $2.1bn in 2008, which was lower than the $2.28bn reported in 2007. We (El Reg), charted the effect of a continuing decline at this 25 per cent rate. 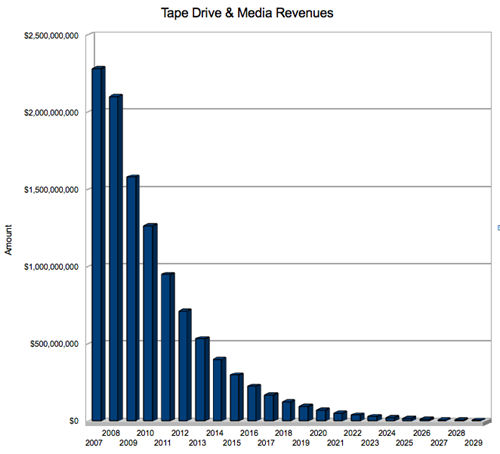 Drives accounted for $629.28m and media for $955.53m of the revenue. LTO format products accounted for the majority of the 2009 business; its drives represented 83.3 per cent of drive revenue, with HP accounting for 51.1 per cent of that.

DDS/DAT drive sales amounted to $114.25m, down 31 per cent from the $165.37m total in 2008, representing just seven per cent of the total back-up technology market. DAT media accounted for $44.55m, with drives representing $69.7m. HP had more than half of the DAT media sales. The new DAT-160 format gained traction but with this rate of overall DDS/DAT market decline there's less and less chance of a DAT-320 format arriving.

Quantum's DLT-V format drive and media unit sales were both off. The drives had sales of a near-trivial $3.95m in 2009 and media accounted for just $22.7m

LTO drives and media have the best outlook: LTO drive sales are expected to grow at a compound annual growth rate (CAGR) of 2.47 per cent from 2009 to 2014, with the media not actually growing, but declining least compared to other media formats at a CAGR of -2.21 per cent.

The recession no doubt contributed to the fall in tape drive and media sales from 2008 to 2009 but the changeover to disk-to-disk backup has to be the main reason for tape revenues to be falling so precipitously. A continued overall 25 per cent decline will see the tape market drop below $500m revenues in just four years. At that point virtually every format will be in maintenance mode. ®