NASA's Wide-field Infrared Survey Explorer (WISE) has snapped the "jumbo jellyfish" resulting from the ejection of material from "humongous" V385 Carinae - a Wolf-Rayet star lying some 16,000 light-years from Earth in the constellation Carina: 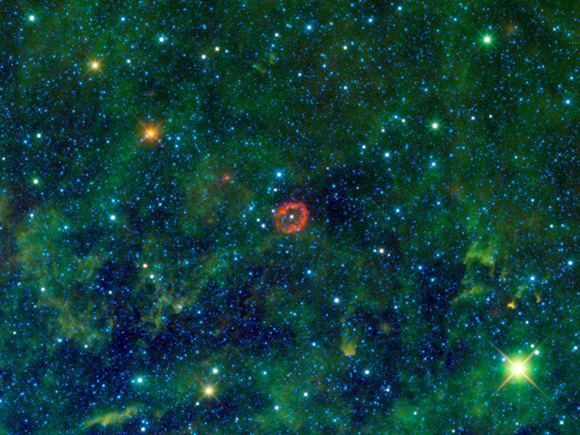 NASA explains that V385 Carinae is about 35 times as massive as our own Sun, boasting 18 times the diameter and throwing out "more than one million times the amount of light".

The agency elaborates, with a light Star Trek-style linguistic moment: "Fiery candles like this burn out quickly, leading short lives of only a few million years. As they age, they blow out more and more of the heavier atoms cooking inside them - atoms such as oxygen that are needed for life as we know it."

What we see above (bigger versions here) is the "hollow sphere" of material "puffed out" by V385 Carinae, detected by WISE in the infrared. NASA elaborates: "Astronomers speculate this infrared light comes from oxygen atoms, which have been stripped of some of their electrons by ultraviolet radiation from the star. When the electrons join up again with the oxygen atoms, light is produced that WISE can detect with its 22-micron infrared light detector."

It adds: "Infrared light detected by WISE at 12 microns is colored green, while 3.4- and 4.6-micron light is blue. The green, kelp-looking material is warm dust, and the blue dots are stars in our Milky Way galaxy."