First Look Apple's much-vaunted iOS 4 arrived Monday morning a few minutes after 10am Pacific time, and nearly an hour and a half later, we were finally able to complete downloading and installing Cupertino's latest and greatest mobile OS onto our iPhone 3GS.

Were its marquee features worth the wait — meaning both the 10-plus weeks since it was announced on April 8 (and renamed on June 7) and the painfully long installation time?

Yes and no. We first took a look at multitasking and the new folder interface, and the "no" part of our answer has more to do with third-party developers than it does with Apple.

Remember that multitasking — one of, if not the, most anticipated features of iOS 4 — is app-specific, meaning that developers need to add multitasking capability to their apps before users can take advantage of this new feature.

When we accessed the iTunes App Store to find out which apps had updates, we were faced with a dozens of updates to apps we have on our iPhone. Unfortunately, the App Store doesn't date updates, so it was impossible to tell at a glance which were new on Monday and which we simply missed over the past few weeks. 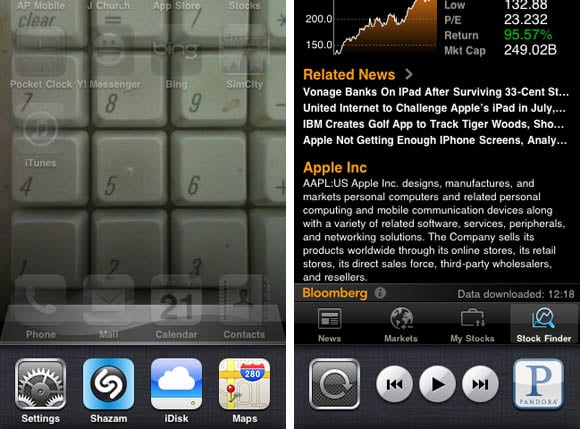 Left: even poorly multitasking apps such as iDisk appear in the multitasking UI
Right: audio controls and a rotation lock are available in the leftmost pane of the side-scrolling UI

So we picked a few of our most-used apps, downloaded their updates, installed them, accessed the multitasking UI by double-pressing the Home button, and chose from recently launched apps in the side-scrolling list at the bottom of the UI. We were pleasantly surprised to find that the app we had most hoped would be ready out of the gate — Pandora — was now quite nicely multitasking-capable. Y! Messenger appears to work just fine as well.

Others were a mixed bag. Kindle relaunched each time we accessed it from the multitasking interface, as did Labyrinth, Fieldrunners, AP, and Mactracker. Bloomberg hopped back to the last feature — search, for example — but not to the most recent search result.

Oddly, it being an Apple app, one would expect that MobileMe iDisk would behave itself, but if you open, say, a Word file in iDisk then switch to another running app, when you go back to the iDisk, that file has disappeared and you're back to the root file list of your iDisk.

As might be expected, the iPod app and Pandora won't play concurrently. And Shazam had the odd effect of turning off Pandora — so it's impossible, for example, to identify a tune being played in Pandora by wrapping your headphones around your iPhone's microphone.

Next page: How 'bout them folders?
Page: