NSFW A South African doctor unveiled an anti-rape device designed to hit assailants where it hurts - the Rape-aXe biting condom. 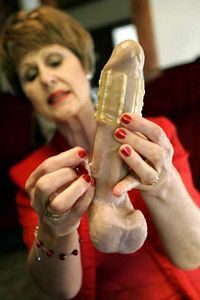 As a 20-year-old medical researcher, Dr Sonnet Ehlers (pictured with the Rape-aXe) met a rape victim who told her: "If only I had teeth down down there." Ehlers explained to CNN: "I promised her I'd do something to help people like her one day."

The result is "a device which latches itself to the skin of the attacker, causing immense discomfort, allowing the victim to escape".

The Rape-aXe blurb continues: "The attacker is 'branded' a rapist! Since the attacker will need medical assistance, there is no escaping arrest since medical staff will alert the authorities."

Ehlers elaborated: "It hurts, he cannot pee and walk when it's on. If he tries to remove it, it will clasp even tighter... however, it doesn't break the skin, and there's no danger of fluid exposure."

Thirty thousand Rape-aXe condoms are been handed out free in South African cities hosting World Cup matches, and once the trial period ends, they'll be available for $1.50 each.

Ehlers said: "The ideal situation would be for a woman to wear this when she's going out on some kind of blind date ... or to an area she's not comfortable with."

However, the Rape-aXe has attracted some criticism, the Daily Mail notes. Victoria Kajja, of Uganda's Centers for Disease Control and Prevention, insisted: "The fears surrounding the victim, the act of wearing the condom in anticipation of being assaulted all represent enslavement that no woman should be subjected to."

Ehlers, though, is determined that the condom will help tackle South Africa's serious rape problem. A 2009 report by the country's Medical Research Council found "that 28 per cent of men surveyed had raped a woman or girl, with one in 20 saying they had raped in the past year".

Ehlers said that some women "take drastic measures to prevent rape", including "inserting razor blades in their private parts".

She concluded: "I believe something's got to be done ... and this will make some men rethink before they assault a woman." ®