An astronaut aboard the International Space Station has captured an impressive snap of the Aurora Australis, while the orbiting outpost was over the Southern Indian Ocean at an altitude of 350km: 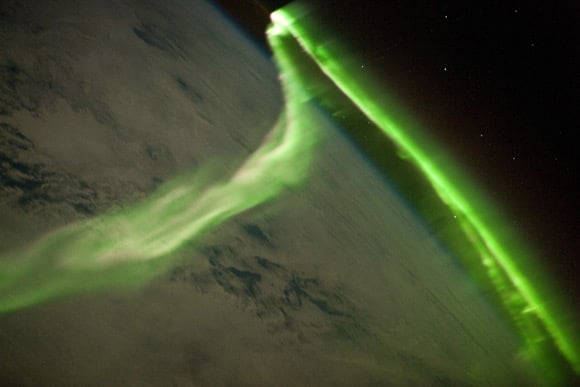 NASA explains: "This striking aurora image was taken during a geomagnetic storm that was most likely caused by a coronal mass ejection from the Sun on May 24, 2010."

For anyone not up to speed on the phenomenon, NASA summarises: "Auroras happen when ions in the solar wind collide with atoms of oxygen and nitrogen in the upper atmosphere. The atoms are excited by these collisions, and they typically emit light as they return to their original energy level. The light creates the aurora that we see.

"The most commonly observed color of aurora is green, caused by light emitted by excited oxygen atoms at wavelengths centered at 0.558 micrometers, or millionths of a meter."

NASA has more on the photo, and a bigger version, right here. ®