Huge new airships for US Army: designed in Blighty

British engineers are to partner with a major US defence contractor to build a large "optionally manned" robot spy airship, intended to lurk for three weeks at a time in the skies above Afghanistan. 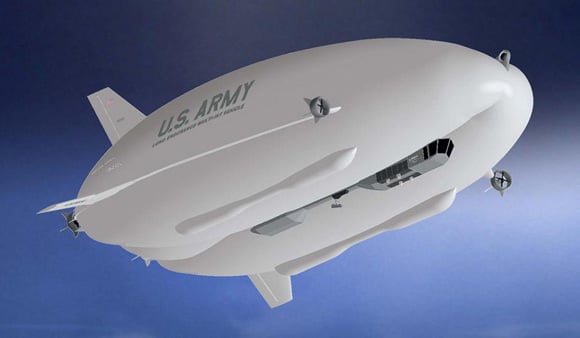 American arms'n'aerospace goliath Northrop Grumman announced the deal last week, revealing that the US Army has ordered "up to three" Long Endurance Multi-Intelligence Vehicle (LEMV) ships in a $517m deal. Northrop will lead a consortium of several firms on LEMV, but it is acknowledged that the actual airships will be based on Brit company Hybrid Air Vehicles' 300-foot-long HAV304 design.

Hybrid Air Vehicles is the latest in a long line of UK firms which have sought to revive the idea of large airships. In the 1930s huge rigid vessels developed from World War I zeppelin bombers astonished the world, acting as longhaul air liners and (in two cases) as flying aircraft carriers with embarked forces of biplane fighters.

Following well-publicised disasters like the R101 and Hindenburg tragedies the great rigids disappeared. But some latter-day enthusiasts have kept the dream alive: in particular Blighty's Roger Munk, who was the inventor and driving force behind UK companies such as Airship Industries, ATG and now Hybrid Air Vehicles (HAV).

HAV's new special sauce was the idea of "hybrid" ships which would not, like their illustrious predecessors, actually be lighter than air. Some 60 to 80 per cent of their weight would be supported by the buoyancy of their helium, and the rest by other means: vertical thrust from the engines during takeoff and landing, and aerodynamic lift generated by the ship's forward motion while in transit*. Here's a vid of a subscale prototype in action:

During Munk's four-decade career from the 1970s on, however, the remaining world airship industry never really got much further than traditional blimps with some minor refinements. At one point early this century it seemed that the grand old days might be back, when famous US military crazytech agency DARPA decided to build an enormous "Walrus" airship transport. This would have been capable of hauling an entire US Army ground combat battalion and its equipment across hundreds of miles to land without an airport, a task impossible for any realistic fleet of current aircraft.

Conventional airships could never fulfil the Walrus requirement as they had to take on equal tonnages of water ballast when offloading heavy cargo. This was to prevent them becoming uncontrollably buoyant and surging wildly off the ground - then to soar through their "pressure height" and lose most of their helium.

Thus the various Walrus contenders generally put forward hybrid-style designs. HAV partnered with Northrop to offer theirs; more well-known at the time was the P-791 subscale demonstrator (seen in the vid below) built by rivals Lockheed. The P-791 used a reversible hovercraft air-cushion system to manoeuvre on the ground for landing and takeoff, which could also be used to suck it firmly down in place while offloading cargo.

Another rival was the Aeroscraft from Ukrainian designer Igor Pasternak, which was intended to make use of superheat/chilling and mysterious gas-compression COSH technology to help deal with the lift-control problem.