Battle for the clouds

Here's the block diagram of the Opteron 4100 chip, with the top of the chip package shown as an insert: 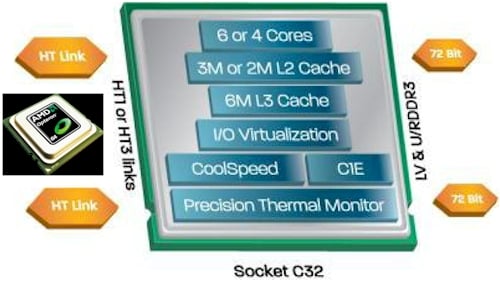 Here's what the chip itself looks like, and you would probably be hard-pressed to tell the difference between a six-core Istanbul from last year: 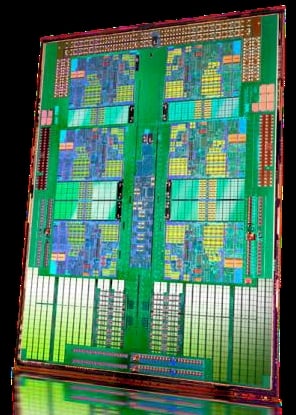 The Opteron 4100 has 904 million transistors implemented on its die, which has an area of 346 square millimeters. The chip has integrated memory controllers on each core, which support DDR3 main memory in both standard 1.5 volt or low-voltage 1.35 volt sticks. Memory can run as fast as 1.33 GHz. Each 1,207-pin C32 socket has 21.3 GB/sec of memory bandwidth over two memory channels and has two x16 HT3 links for up to 6.4 gigatransfers per second (GT/sec) of point-to-point bandwidth. The Opteron 6100 has twice as many HT3 links and twice as many memory ports to double up its memory and interconnect bandwidth, which stands to reason given that the Opteron 6100 is really just two Opteron 4100s snuggling in a single 1,944-pin G34 socket.

There are nine Opteron 4100 processors, and one of them that was expected to be launched today – a 2.9 GHz standard part called the Opteron 4186 with a $455 price tag – did not make the cut. Here are the ones AMD is putting into the field:

In terms of price per clock, the Opteron 4100s are going to win out over the Opteron 6100s in almost every case, and that is so by design given the intended customer set: those building high-density twin rack servers or skinless servers, looking to maximize the number of server units in a brick and mortar or containerized data center.

Next page: No Specials
Page: