Well, it was strongly implied

Venus could once have been a living world with watery surface oceans, according to the European Space Agency. The ESA says that data from its Venus Express probe in orbit above the second planet indicates that it "may even have begun its existence as a habitable planet similar to Earth". 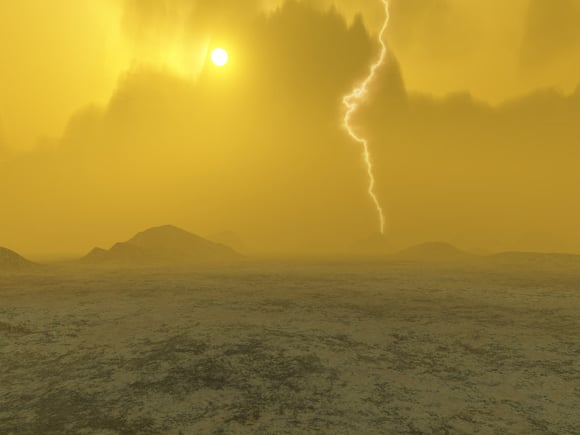 OK, so where's the ruined city built by the aeons-dead Venusians?

According to a statement issued yesterday by the Euro-centred* space bureau:

Earth and Venus seem completely different. Earth is a lush, clement world teeming with life, whilst Venus is hellish, its surface roasting at temperatures higher than those of a kitchen oven.

One [other] difference stands out: Venus has very little water. Were the contents of Earth’s oceans to be spread evenly across the world, they would create a layer 3 km deep. If you were to condense the amount of water vapour in Venus’ atmosphere onto its surface, it would create a global puddle just 3 cm deep.

But that wasn't always the case, apparently. Long ago, Venus had lots of water. "Venus Express has certainly confirmed that the planet has lost a large quantity of water into space", insists the ESA.

"Everything points to there being large amounts of water on Venus in the past," says Colin Wilson of Oxford uni here in Blighty.

Some theories, for instance a model produced by French boffin Eric Chassefière, suggest that all or most of the second planet's water existed only as clouds - it never managed to fall as rain and create oceans as we have here on Earth.

But this is only a theory at present. The ESA statement describes Chassefière's model - perhaps for good and sufficient reasons to do with public interest in space research and associated availability of funding - as "difficult to test". The agency goes on to say that the work "does not preclude the chance that colliding comets brought additional water to Venus after the surface crystallised, and these created bodies of standing water in which life may have been able to form".

Audacious speculation indeed. We'll go further, and suggest that logically if life could have appeared on prehistoric Venus, it might have attained intelligence and even civilisation before the planet's water escaped into space and it was snuffed out. The second planet may yet be host, beneath its swirling oven-like atmosphere, to lost cities and ruins erected by a long-dead race of Venusians.

Spin your own Friday-afternoon notions on from there: some ancient Venusians may yet live on in survival bunkers, either slumbering away the aeons in some analogue of the frozen sleep soon to be developed by humanity - or perhaps merely as samples of DNA-equivalent tissue signatures which could one day be reborn into living, breathing aliens.

It all sounds like rock-solid justification for continued Venus missions and space exploration in general. But then we believed that anyway. ®

*Though not actually European as such. The ESA works closely in partnership with the European Union, but it has a different list of member states and is somewhat trans-Atlantic (it includes Canada).