Problems with the primary armament of the Royal Navy's new, £1bn+ Type 45 destroyers have been rectified, according to reports. 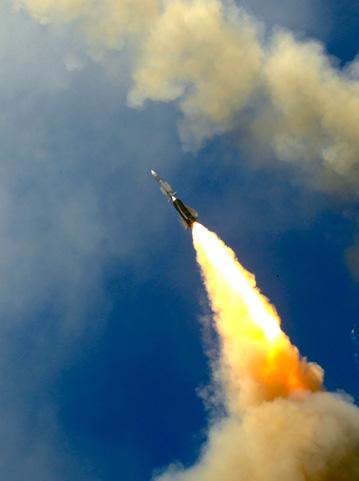 The Royal Navy already has two Type 45s, HMS Daring and HMS Dauntless, but test-firings last year of their main armament - the Principal Anti Air Missile System (PAAMS, the British configuration of which is known as "Sea Viper") - were failures, meaning that the weapons could not be accepted into service.

This left the Type 45s - one of which is already on her second captain - almost unarmed, packing only a 4.5-inch bombardment gun and a couple of light 30mm cannon.

The failed test firings were blamed on a problem with the French "Aster" missiles used by Sea Viper. This has meant a design change and delayed deliveries, but pan-European missile firm MBDA, maker of the Aster, now says that the redesigned missiles have been successfully tested.

According to a statement issued today by MBDA:

Over the last month, firings have been carried out from the Italian Orizzonte frigate “Andrea Doria”, the French Horizon frigate “Forbin” and the UK trials barge “Longbow” at two different ranges in the Mediterranean. The trials were conducted over a range of scenarios of steadily increasing complexity, culminating in a final trial featuring a salvo firing against a sea skimming target performing a high-g terminal manoeuvre. All the trials were fully successful with both the PAAMS ship equipment and Aster missiles operating as expected in each case. This draws to a close the complex and high intensity investigation launched within MBDA after problems encountered in two firing trials last year.

According to the firm, four firings in all were carried out.

The new test results should mean that the Royal Navy's ships, once their magazines can be filled with new re-designed Asters, will finally be judged combat-worthy later this year.

The Type 45s, however, will still possess no ability to engage surface targets or ones ashore with guided weapons: they will be almost entirely air-defence ships, with some secondary capabilities delivered via their guns and embarked helicopters. It was originally hoped that the destroyers might carry Tomahawk cruise missiles for surface combat and land-attack purposes, but owing to the selection of the Aster missile this isn't simple: had the rival American Standard been chosen the same launch tubes would have done for Tomahawks too, but this is not the case with Aster's "Sylver" launchers.

Nonetheless the captains of the Navy's new billion-pound gunboats will no doubt be looking forward keenly to the prospect of tooling up with some working weapons which weren't in service well before World War II. ®