Earthy speed to get probe 'up close and personal'

A NASA space probe famous for bombing a comet five years ago made a final "flyby" past Earth last night, changing its orbit around the Sun with the aid of the planet's gravity. The renamed "EPOXI" craft (formerly "Deep Impact") swooped low just 19,000 miles above the South Atlantic at 11pm UK time last night. 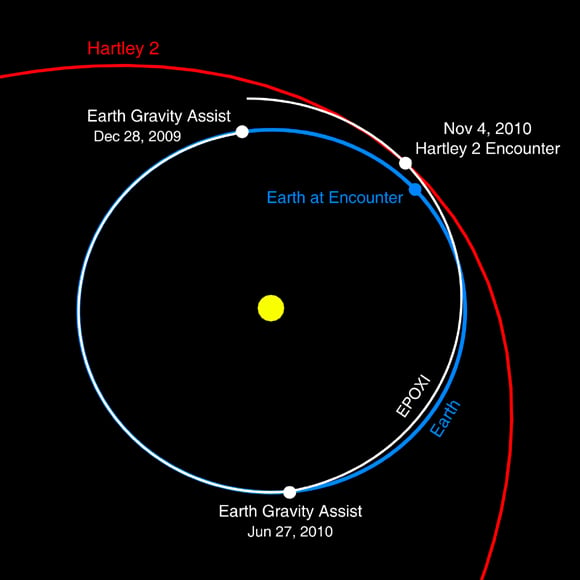 One way of looking at it

Last night's 12,750 mph flypast will see the dual-missioned spaceprobe accelerate by no less than 3,470 mph in its bid to reach the comet Hartley 2 later this year. EPOXI's name reflects the two new tasks it was given following the Deep Impact comet-bombing run: Extrasolar Planet Observation and Characterization plus Deep Impact Extended Investigation.

After the successful 2005 strike in which the then Deep Impact smashed a probe into the comet Tempel 1, NASA assessed that the probe still had plenty of manoeuvring fuel left and that, by means of judicious low passes above Earth, it could be steered to a new rendezvous with another comet. The Hartley intercept, however, will not involve an impact probe like the Tempel rendezvous. 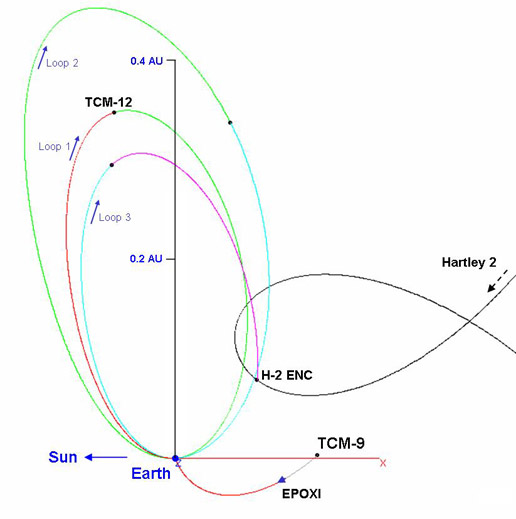 Here's another from our point of view

"There is always some gravity boost at a flyby and in some cases, like this one, it is the main reason for a flyby. The last Earth flyby was used primarily to change the tilt of the spacecraft's orbit to match that of comet Hartley 2, and we are using Sunday's flyby to also change the shape of the orbit to get us to the comet," says astronomer Michael A'Hearn, boss boffin for both Deep Impact and EPOXI.

Following Sunday's flypast EPOXI is now outward bound to intercept Hartley 2 on November 4. The small comet, which orbits the Sun every six years, will at that stage be almost as close to the Sun as it ever gets, just outside Earth's orbit.

"Earth is a great place to pick up orbital velocity," said Tim Larson, the EPOXI project manager from NASA's Jet Propulsion Laboratory. "This flyby will [get us] up close and personal with comet Hartley 2." ®