Google has updated its Google Docs Viewer to allow those who walk the iOS path to share in the joy of viewing - though not editing - their Google-hosted documents.

There's also now an Android version and both will happily display .doc and .docx formats, the latter being used by more recent versions of Microsoft Office, along with .ppt and pdfs too – all within the iOS/Android browser. 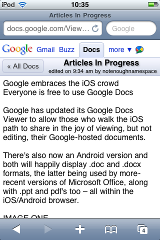 You can look, but don't touch

But viewing is all you can do – if you want to edit documents then you'll need to download them into a native application of some sort. Neither platform is bereft of such applications, including some which will integrate with the Google cloud; but they cost a penny or two, prompting lots of feedback to Google asking for editing to be added next, ideally as a native application.

But a native word processor, or presentation editor, is something Google has shied away from before, even on its own Android platform. There is some irony in Google relentlessly pursuing the applications-in-browser strategy that Apple was so quick to desert when the limitations became manifest.

But if you've got documents knocking about in Google's cloud then point your Android/iOS device at docs.google.com to see them rendered in marvellous miniature. ®