Spectrum Bridge has been busy working out how to use the white spaces between the TV channels, while the FCC continues dithering over who gets to run the database of such channels.

The latest deployment put in by Spectrum Bridge connects up electricity sub-stations around the Sierra Nevada Mountains, allowing remote monitoring and load balancing, as well as providing broadband to a handful of houses so they can connect their meters to Google Powermeter: thus painting the project green. Which is all that's possible until the FCC gets round to deciding who is going to manage the spaces, and how.

Last year the FCC decided that where a TV station isn't using a particular frequency then low-powered radios should be allowed to operate without a licence. With a good eye for marketing Google quickly branded the technology "Wi-Fi on Steroids", but neither Google nor the equally-enthusiastic Microsoft could demonstrate white-space equipment with the ability to detect existing TV users, so the FCC decided that white space devices would be dependent on an online database to ensure they didn't interfere with the latest episode of America's Got Talent.

Since then the FCC has been trying to decide who should run that database, and how usage should be restricted (how often devices should check back, how much bandwidth they should be allowed to block book, etc.)

Google magnanimously volunteered to run a master database for nothing, collecting the location, make and frequency of every white-space device in America out of the goodness of its heart; but that idea has proved surprisingly unpopular with the rest of the industry.

So the debate continues, with half a dozen companies still vying to run the database(s) and TV companies joining forces with ISPs and radio microphone users to lobby for white space to be restricted to fixed point-to-point connections ideally suited to their own backhaul needs.

Meanwhile Spectrum Bridge has been running three trial networks to prove the technology works, and put itself in a good position when the FCC finally makes up its mind. 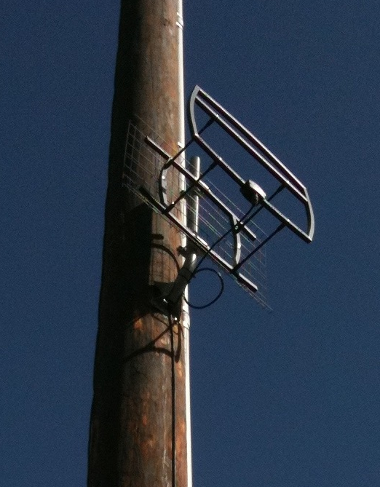 You won't get EastEnders on this, hopefully

The networks deployed by Spectrum Bridge transmit at four watts, attaining speeds up to 3Mb/sec over four miles in a 6MHz channel (US TV channels are 6MHz wide, ours are 8MHz). The great thing is that those connections don't need line of sight as the TV frequencies pass straight through trees and bushes and even, with a following wind, a building or two.