As Windows 7 was being launched I mentioned that we needed a bit of an in-depth hands on. It was one of those volunteering efforts where you realise that you haven't taken a step forward, but everyone else had cunningly shuffled one step back. I protested that Tim Anderson had done us an excellent review – in fact a very model of concise writing – and there won't be a better two page summary of Windows 7 on the web. All in vain.

Oh, well. It's dirty work, but at least you can make it interesting. How would Windows 7 compare with Linux? I thought it would be a pushover, so handicapping it in favour of Linux, to make it more even, I used old as well as new hardware. The compressed air duster was applied to a Thinkpad X31 (Centrino 1.6Ghz), and I had use of a Dell D430 (dual core, 4200rpm disk).

The first stop was Xubuntu. This appeared to be just the ticket for a less-than-bleeding edge hardware spec. But Xubuntu didn't get on with my laptops. I found myself hunting down an ndis wrapper for an ancient and popular 802.11 card, just as I had done years ago. This was supposed to be Ubuntu, but leaner and meaner. Was this as good as it got?

I moved on to Kubuntu. KDE was as exactly as I feared.

Now you may already know this, but if you haven't followed open source development politics for ten years (and, er, maybe you have had something better to do) the tale of KDE is a fascinating and sad story. Something strange happened to KDE in the last decade. Ten years ago it was a robust, decidedly unglamourous desktop. The design was very German. It worked. They took pride in that, and not being like the flakey and fancy Gnome kids.

The most pithy experience of KDE 4 was written by Slashdot user called orthogonal, and you can find it here. 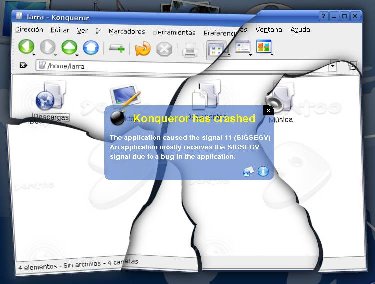 KDE had seriously lost the plot, and steered into Strategy Boutique territory. (When you no longer have a product that satisfies users, bullshit is the only option.) This actually was a blessing for Linux, because with one of the two desktop environments removing itself from the picture, development focused on the one that was still waggling its little legs. It seriously blighted SuSE, a good choice back in the day. SuSE's font rendering was horrific.

So finally, and after too long, Ubuntu Karmic Koala went onto the Dell. And Ubuntu turned out to be quite smashing.

I don't know why I hadn't started with Ubuntu. It seemed to be trying a bit too hard, the last time I looked. It was the only distro with the Collected Speeches of Nelson Mandela, and a 13-part Lingala language lesson in the startup folder.

But Umbongo was truly a revelation.

Setting up Wi-Fi was simple. A 3G dongle worked first time. So did another, and then another. Ubuntu even found a peculiar printer arrangement of mine right out of the box, and without prompting (it's a Laser attached to the USB port of an Apple base station). This had stumped Windows - even Windows 7 with the aid of Bonjour. And when you put Ubuntu to sleep, it really fell into a deep, sound sleep, and then woke quickly and reliably ready for work. Windows XP had never done this – except perhaps on the day of its installation [#]. XP would more typically decide, at random, to beep loudly at 3am, just for the hell of it, or cause the X31 to turn on its fans - like a grumpy child having a nightmare. Ubuntu didn't. It was getting quite Mac-like.

And all the old reasons for using Linux were still there. Network operations were fast. You could customize the keystrokes that mattered (I could care less about most operations, but a few really do matter); the Debian installer was underneath. Security was not an afterthought or a “Message: we care” cue-card, as Thomas C Greene put it.

The menus were clean and logical. My only reservation was that the aggressive power management wasn't quite there – losing 15 minutes from XP with a three-ish hour battery, for example. But this was no worse than Vista or Windows 7, I figured, and I'd get round to fiddling with the power settings some day.

There were and are still rough edges. You didn't have to go very far to find them. As well as smoothing things out, Ubuntu had hidden a lot of options, and unlike SuSE, it wasn't so easy to find them. (This is true of the window controls shifting to the left, Mac-style, in Ubuntu 10. You have to know, or Google it, or download an Ubuntu "PowerTools" app to put them back over to the right. A simple clear setting would help.)

But I was impressed that Linux had found the benevolent dictator it needed to sort out the UI mess. This was the Shuttleworth effect – and he seemed to have done the impossible. I was particularly impressed by Ubuntu's mission to stomp out the very minor UI idiocies and inconsistencies that add up, such as inconsistent or nonsensical labelling or dialog messages.

So if it's got this far without anyone really noticing, what's next? That's what I'll explore in the second instalment. I fear this is where things get quite hairy, but even more interesting. ®

[#] Back then I carried the Reg around with me – 20,000 html files - this was The World Before Google, and there were no fast or comprehensive search engines.