F-Spot, Shotwell, RawTherapee in the frame

Best of Linux When it comes to photo applications it seems Windows and Mac have things nailed down, with plenty of individual applications and several packages packed with tons of features.

In this second look at how media and storage applications for Linux, and particularly Ubuntu, compare, I found the Gnome camp has plenty of options too - you just need to be picky.

Photo applications come in three basic flavors - tools that organize your photos, tools for editing them and those that offer both. The latter tend to offer minimal editing tools, but for many that's all that is necessary.

When it comes to serious photo editing, GIMP takes the cake. Offering all of the most commonly used tools in Adobe's Photoshop, GIMP is a free, open source photo-editing powerhouse.

As for organizing your photos in Linux, the options are not quite so stellar. In the Windows and Mac world, freebie photo apps - like Google's Picasa or Apple's iPhoto - are robust tools that support basic editing and sophisticated organizing options like geotagging and facial recognition, as well as tools to automatically upload your images to the web. 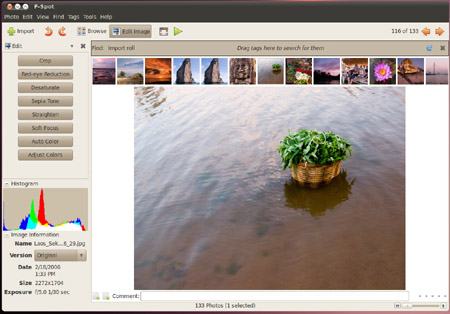 Hits the F-Spot: a solid, if basic, photo organizer

Most Ubuntu users will be familiar with F-Spot, long the default image editing and organizing app in most Gnome distros. F-Stop has some, though not all, of the features you'll find in Picasa and iPhoto, but extras like geotagging or facial recognition are missing.

Sadly, not only does F-Spot not offer a way to add geodata to your images, it doesn't even recognize the geodata that your camera may be recording. There are some third party plugins for F-Spot that claim to enable geotagging, but in my testing none of them worked properly. 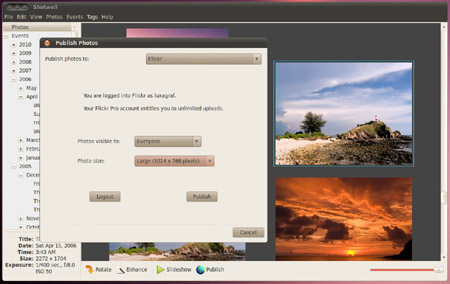 Shotwell's current shortcomings have been overlooked by Ubuntu and Fedora

While F-Spot may lack some of the fancy extras, it does make a solid, if basic, photo organizer - put your photos in albums, tag them if you like and do some very basic retouching like red-eye removal or cropping.

F-Spot has a well thought out, reasonably intuitive interface, and if your editing and organizing needs are minimal then it will do just fine.

If you're a fan of F-Spot, you might be disappointed to learn that you'll be installing it yourself when Ubuntu 10.10 arrives. Canonical plans to join Fedora in dumping F-Spot for the new kid on the block - Shotwell.

Next page: Bring on the GIMP
Page: