Motorola is taking advantage of the iPhone 4 'Death Grip' debacle by kicking Apple when it's down: the Droid maker ran a full-page ad in Wednesday's New York Times ridiculing the Jobsian handset's antenna problems.

In the advert — underneath a photo of Motorola's upcoming Droid X, complete with the obligatory comely lass — is a paragraph of advertising copy extolling the Android phone's features. One part of that exaltation is this sentence:

And most importantly, it comes with a double antenna design. The kind that allows you to hold the phone any way you like and use it just about anywhere to make crystal clear calls. 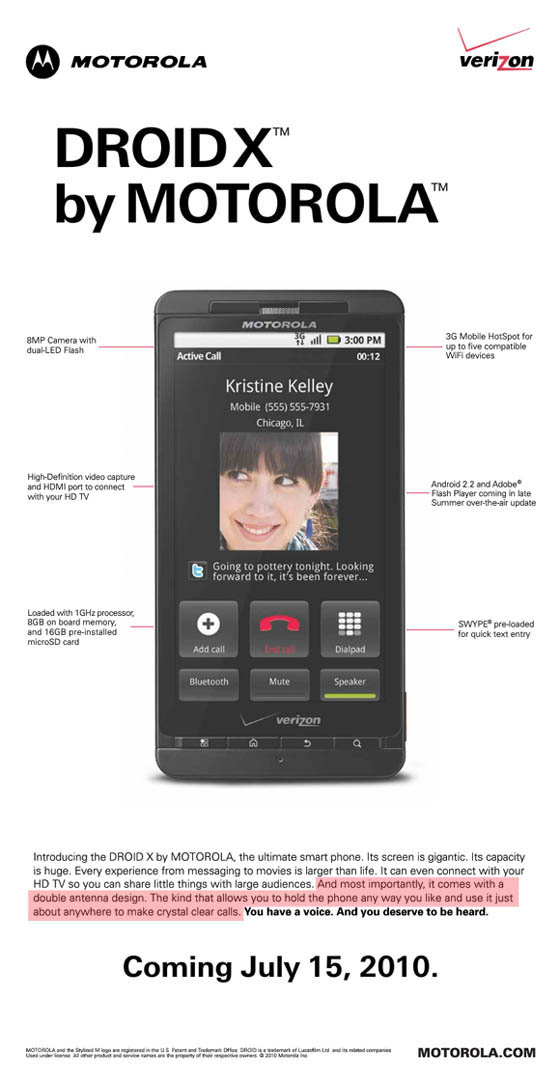 Motorola is not alone in its ridicule of the iPhone 4. On Monday, Nokia hosted a mocking how-to on its company blog outlining four ways to hold their Finnish fones – a teasing tweaking that was a direct response to Apple's contention that the iPhone 4's reception problems are caused by users holding it wrong.

There's both humor and schadenfreude in Motorola and Nokia's tossing of their respective banana-cream pies into Cupertino's face after the iPhone's banana-peel slippage — to mix metaphors a wee bit.

However, there is a serious side to this tomfoolery. Apple has been riding high for quite some time, and its competitors and detractors have been waiting impatiently for Jobs & Co to make a major misstep. And that time may have arrived.

In a detailed review and antenna exegesis released today, the exceptionally intelligent folks at Anandtech said of the iPhone 4's reception problems:

The main downside to the iPhone 4 is the obvious lapse in Apple's engineering judgment. The fact that Apple didn't have the foresight to coat the stainless steel antenna band with even a fraction of an ounce worth of non-conductive material either tells us that Apple doesn't care or that it simply doesn't test thoroughly enough.

The Anandtech reviewers continue: "The best scenario is for Apple to coat the antenna and replace all existing phones with a revised model. The ideal situation is very costly for Apple but it is the right thing to do."

Motorola, Nokia, and other competitors may be witnessing the beginning of the Toyotafication of the iPhone 4: an embarrassing, costly recall.

To muck about with another metaphor, the jury is still out but the lawyers have begun to smell blood. As each day goes by, it becomes increasingly clear that Apple has a real problem on its hands — or, more to the point, in the hands of iPhone 4 owners.

How Apple responds to this problem will reveal a lot about the company and its mercurial leader.

Even Steve Jobs' powers of persuasion and coercion have their limits. As Anandtech reminds us: "There's nothing Apple nor anyone else can do to get around physics, plain and simple." ®