Updated The first lawsuits over the iPhone 4's reception problems have been filed.

The most prominent of the batch — which, according to AppleInsider, includes actions brought in California, Maryland, and Texas — is the one filed a few miles and a bridge toll north of Apple's Cupertino headquarters, in the US District Court for the Northern District, located in Oakland. Unsurprisingly, the law firm initiating the suit is Kershaw, Cutter & Ratinoff LLP, which began trolling for prospective plaintiffs earlier this week.

The California class-action suit was filed by 11 plaintiffs "on behalf of themselves and all others who are similarly situation [sic]". The defendants in the case are both Apple and AT&T, the iPhone's exclusive US service provider.

The central claim in the suit is straightforward, citing "design and manufacturing defects that were known to Defendants before it was released which were not disclosed to consumers".

The suit alleges that due to those defects, "Consumers are left with three options: hold their phones in an awkward and unnatural manner; return their phones and pay 10 per cent 'restocking fee', or purchase Apple's own 'bumper' cases for their phones, costing $29.95 in addition to the premium they have already paid for the phones themselves, which may somewhat ameliorate the iPhone 4's defects."

Apple and AT&T knew that the antenna design of the iPhone 4 caused reception problems, the suit alleges, but "willfully, falsely, and knowingly misrepresented material facts relating to the character and quality of the iPhone 4 units." 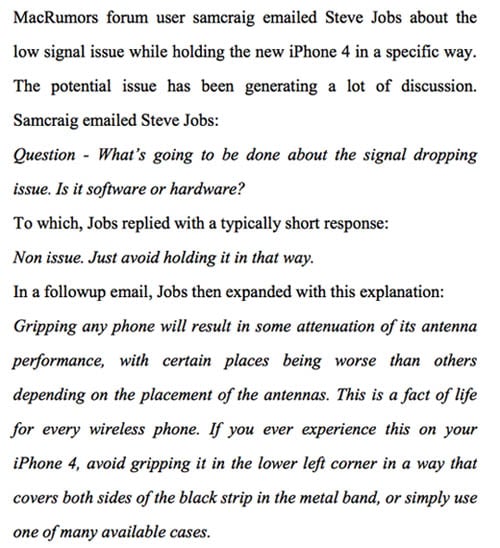 Apple is seeking to "enrich" itself by suggesting that iPhone 4 owners buy the company's iPhone 4 Bumpers: "Plaintiffs are informed and believe and thereon allege that this is a known defect in the iPhone 4 which was never disclosed to its purchasers, and which Apple now is using as a means to further enrich itself at the expense of its users, who purchased a phone with known design defects."

The suit also uses the "r word" in its allegations (emphasis ours): "Defendants failed to use due care by failing to issue a voluntary recall or at the least by failing to waive the restocking fee for returned iPhone 4s."

Noting that owners of the "inherently defective" iPhone 4 aren't being provided with the service that Apple and AT&T promised in their marketing materials, the suit says: "The Apple iPhone 4 is not fit for its warranted, advertised, ordinary and intended purpose of providing reliable network connectivity and is in fact defective, or would not pass without objection in the trade or industry in terms of being unable to provide consistent and reliable network connectivity through ordinary use."

And who, exactly, is at fault for that lousy service? The suit say that it doesn't matter: "Whether the problem is with the Apple iPhone 4 itself or with the AT&T network, or a combination of the two, is irrelevant..."

And so the plot thickens. As The Reg reported yesterday, the deep-tech site Anandtech has posted an otherwise favorable review of the iPhone 4 that includes a devasting technical critique of the iPhone 4's antenna.

One Reg reader made an astute comment to our story, saying in reference to the iPhone prototype that caused the long-running Gizmodo flap: "Wasn't the prototype in an iphone 3G case when it was 'found'? No way to cause the fault if you have a case on the phone so I hope he wasn't field testing signal strength."

If we were members of Apple's legal team, we would seize that thin reed of argument and hang on tightly: "Hey, we always tested the iPhone 4 when it was in a case! We didn't know there were problems until after we shipped the %$#@!ing thing!"

It's not much, but it's a start. And it may be the only argument that Apple has against the "willfully, falsely, and knowingly misrepresented material facts" allegation. But if Anandtech's analysis can be verified to a judge's satisfaction, there may be nothing that can stand between Apple and that dreaded "r word". ®

The Boy Genius Report has published a bizarre exchange that it claims is an authentic email back-and-forth between Steve Jobs and a thoroughly pissed-off iPhone 4 owner. Jobs tells the ranter that he's merely "getting all worked up over a few days of rumors" and that he should "Calm down." The thread ends with Jobs writing: "It is just a phone. Not worth it." The Reg has no way of either authenticating or debunking BGR's story, but if it's true, it underscores what we've written in the past: Apple's IT chief should take away Jobs' iPhone — especially now that the company is under legal attack.

The geniuses at the Boy Genius Report updated their article on Thursday afternoon to issue a correction: that last line — "It is just a phone. Not worth it." — wasn't from Steve Jobs, but rather from the purported complaining fanboi to Steve Jobs.