'Zeppelin explodes in New Jersey: Not many dead' 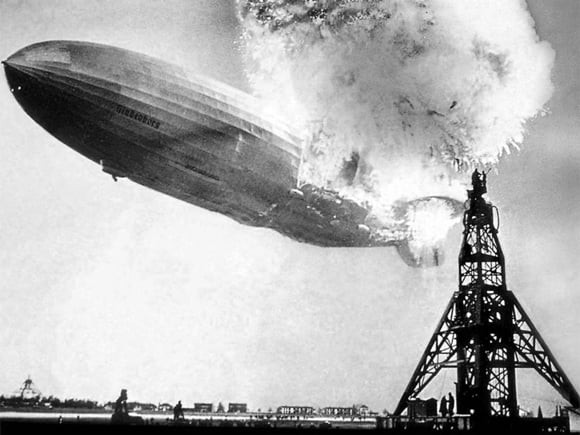 Oh, the uncertain amount of humanity

Massive helium balloons – or blimps1 – would replace aircraft ... helium-powered2 ships could be carrying freight – and even passengers – in as little as a decade's time ... with a 90% reduction in greenhouse gas emissions ...

In 1929 a graf zeppelin3 circumnavigated the planet in just over 21 days. The [pre-WWII] craze for blimps came to an abrupt halt after the death of many people when the Hindenburg caught fire4 in New Jersey, US.

Reading so many errors in such a short piece is painful, but even so we here on the Reg airship desk love the idea of a comeback by big proper aerial vessels. And hey, actual real boffins are saying it's on the cards!

Even better, Sir David and a couple of his colleagues at Oxford's Smith School of Enterprise and the Environment have done a study into the matter, which can theoretically be read in pdf here. We found the Smith School download a bit troublesome, so you may want to read it courtesy of Google Docs like this.

Unfortunately the Smith School report is short on hard analysis and long on misty speculation. It does admit that most of today's airline passengers, accustomed to moving about the world at close to the speed of sound, are unlikely to settle for typical airship speeds of 70 or 80 mph. Then in the case of cargo, rather more than half of all air freight today is carried aboard passenger flights - there would be little point shifting this to other platforms.

So we're down to say 40 per cent of air freight as our maximum possible scope. Air freight is thought to be responsible for maybe 20-25 per cent of aviation's carbon emissions. We might get rid, though, of 90 per cent of that by using airships instead of planes.

Whoa there - that figure of 90 per cent comes from would-be airship maker SkyCat. In a test case examining a notional shipment of Spanish strawberries to the UK, they admit that the actual fuel burn saving of using an airship would only be 40 per cent. The airshipheads go on to say, however, that because an airship flies at much lower altitudes than a modern jet its emissions cause less global warming - so the CO2 equivalence is down by 90 per cent.

Next page: Carbon emissions in an airship-cargo future would be ... 99.9% of what they are now. Woo!
Page:
Tips and corrections
90 Comments