The latest version of openSUSE hit final code last week and is not due for official release until July 15, but The Reg is here to give you a tour of its pros and cons.

The free operating system has been somewhat maligned for its association with Novell, the Linux company that partnered with Microsoft and is now touting itself for sale, so it's perhaps unsurprising that the release comes on the heels of a new mission statement that seeks to create a bit of distance between openSUSE and Novell's commercial projects.

The project's community statement calls for the creation of an openSUSE Foundation to help foster a more open, active community of contributors.

Although Novell technically only sponsors the openSUSE project, three of the project's five board members are Novell employees, and historically openSUSE rarely strays too far from the stated goals of Novell's commercial SUSE Linux Enterprise Desktop (SLED) distribution.

Clearly, the project would like to be seen as more than a proving ground for SLED — and with Novell busy on the MeeGo netbook distribution, there seems to be little resistance to openSUSE's assertion of autonomy. 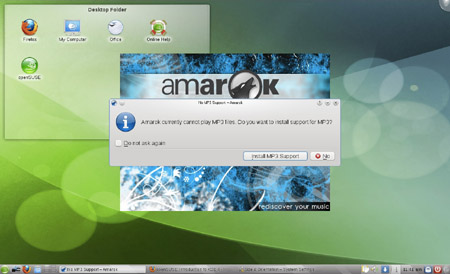 Amarok reminds you that codecs are missing, but installing them is anything but automatic

Given that the latest openSUSE includes the Fedora-developed open Nouveau driver to improve support for Nvidia graphics cards (shipping with Fedora 13), an RPM-based package manager, and a similar commercial derivative coming from it, the openSUSE project is clearly taking some inspiration from the Fedora project.

But while the other changes — assuming they happen — could end up transforming openSUSE into something a bit more like Fedora, for the 11.3 release openSUSE still feels primarily like a typical openSUSE release. And that's both a good and a bad thing, based on the final-release code I tested.

One way that openSUSE differs from Fedora, Ubuntu and other popular distros is its love of KDE. Last year the openSUSE developers formally announced that KDE would be the default openSUSE desktop.

However, despite the emphasis on KDE, openSUSE remains one of the most desktop-agnostic Linux distros. The 11.3 release offers the same live DVD as previous release, including the GNOME, KDE and XFCE desktops, as well as just about every package under the sun. The only difference is that the DVD now selects KDE by default during the install. 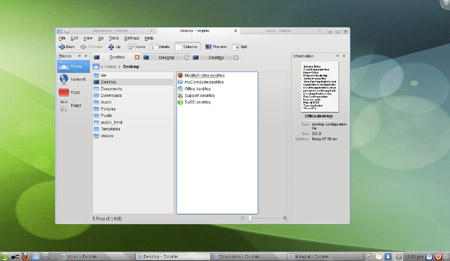 If you haven't got the bandwidth (or time) for the 4.7GB DVD download, there are live CDs with either GNOME or KDE.

While Linux installers have improved across the board, openSUSE's live install process has been always been a step above most distros. With an option to auto-partition your system with separate partitions for root, system, and home, as well as to automatically apply any available updates before you boot into your new desktop, openSUSE 11.3 is one of the smoothest installations I've done.

Underlying openSUSE is the latest Linux kernel, 2.6.34, which was still a release candidate when I tested the second openSUSE 11.3 release canidate. Hopefully it will have reached final release stage by the time openSUSE does likewise. Among other improvements, 2.6.34 adds some basic support for more recent Radeon graphics cards.

I tested both the GNOME and KDE desktops and found that, unlike Ubuntu, where the Kubuntu distro feels a bit behind the GNOME version, in openSUSE the KDE desktop is definitely the focus.

Next page: Truth in advertising
Page: