The cycle that can be wrapped round a lamppost - intentionally

Now this is a great idea: a bike with a bendy frame that allows it to be literally wrapped around a lamppost and locked up.

The flexible frame was developed by DeMontfort University, Leicester final-year BSc Product Design student Kevin Scott and won him a runner's up prize in the recent Business Design Centre (BDC) New Designer of the Year competition. 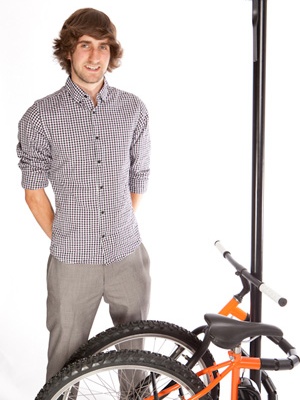 Scott's design essentially replaces two parts of a bike's frame with a segmented tube and, within, a cable. Tighten the cable and the segments snap into place with sufficient rigidity to allow you to ride the bike safely.

Loosen the cable - there a ratchet just below the saddle - and the frame can now bend through 180°.

You can lock a regular bike to lamppost of course, by Scott's design takes up considerably less room.

Scott's prize win netted him £500. "I intend to use the prize money to outsource production of some of the key components to allow for full testing," he said. ®

Lessons learned could be applied to a next-gen fighter, says company
Systems7 Feb 2023 | 13

You may have already known this... but did you know you'll lose data migration unless you switch to paid?
Applications7 Feb 2023 | 35

Updated Work on a Gecko-based version of Firefox for iOS is underway, again
Devops7 Feb 2023 | 9