US aerospace mammoth Boeing yesterday rolled out its "Phantom Eye" unmanned strato-plane, able to cruise high above the airlanes for up to four days - powered by two ordinary Ford car engines running on hydrogen. 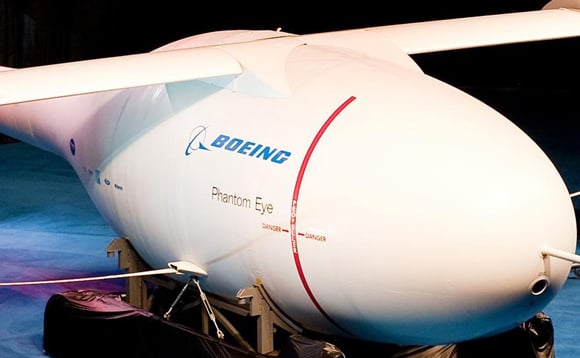 Just bolt on a couple of Ford Fusion engines and you're done.

"The program is moving quickly, and it’s exciting to be part of such a unique aircraft," said Drew Mallow, Phantom Eye program manager, in a statement issued yesterday. "The hydrogen propulsion system will be the key to Phantom Eye's success. It is very efficient and offers great fuel economy, and its only byproduct is water, so it's also a 'green' aircraft."

To be specific, the Phantom Eye uses 2.3 litre four-cylinder engines of a type normally found in some models of petrol-burning Ford Fusion, turbocharged and tweaked so as to run on hydrogen at 65,000 feet.

Four days would suggest pretty good fuel economy, right enough. However "green" is a bit of a stretch as hydrogen at the moment is normally made by reforming natural gas. This releases copious amounts of carbon into the atmosphere - usually more than one would generate by running an ordinary fossil-fuelled car engine - so it is hardly green*.

One might also quibble with the "moving quickly" description of Phantom Eye. True, Boeing announced that it would start work on the Eye only in March, which would suggest impressive speed by the Phantom Works engineers.

In fact, however, the company has been touting Ford-powered high altitude drones for several years now. Indeed, back in 2007 it managed to get some military development cash for the previous "Orion" single-engined version, which could also stay up for four days. At that time, Boeing considered that a twin-engined job along Phantom Eye lines would be good for 10 days, not four - though the firm seems to have walked back on that somewhat.

Phantom Eye, then, hasn't appeared with lightning swiftness: though one might excuse the Phantom Works engineers for that. The event which actually got the ball rolling again on the Phantom Eye was Boeing's decision to provide development cash itself, having failed to get any from government customers. Lately, companies such as General Atomics have won a lot of government UAV business by offering finished products rather than insisting on taxpayers furnishing development money up front.

The next move for Phantom Eye is shipment to NASA’s Dryden Flight Research Center at Edwards Air Force Base in California. It's expected to make its first flight next year. ®

*Hydrogen might be made greenly in future by cracking water with electricity; however at current 'leccy prices this is more expensive than gas reforming. Then, hydrogen is difficult and expensive to store and transport afterwards as well. At the moment, for military users - the likeliest initial Phantom Eye customers - it will be easier to set up transportable gas-fuelled hydrogen plants at airbases as necessary.

Boeing's Calamity Capsule might take to space once again ... in the first half of 2022