EU-backed university researchers are aiming to reinvent the hard disk with a 1Tbit/in2 areal density platter based on nanospheres.

The project is called TERAMAGSTOR (TERabit MAGnetic STORage technologies) and is based on work by Professor Dr Manfred Albrecht of the Physics Department in Chemnitz University of Technology in Germany. He coordinated a team of researchers in Germany, Switzerland, and Sheffield in the UK. The project is a follow-on to MAFIN (MAgnetic FIlms on Nanospheres), a prior proof-of-concept project which explored the nanosphere-based technology.

The MAFIN and TERAMAGSTOR projects are based on the idea of patterned bits, but not using the current notion of having an insulating ring arround every bit and preventing its magnetic charge being affected by the surrounding bits. The idea is to base each bit on a defined nanoscale structure, a nanosphere, and this is used to hold the bit's magnetic charge and keep it stable. 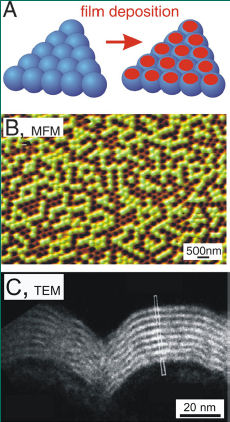 TERAMAGSTOR images: (A) Base nanospheres which are then given a magnetic cap (in red). (B) Binary values of read caps, and (C) the curvature of the nanocaps.

Each nanosphere is smaller than the 60-80 grain-sized magnetic cells used in today's hard disk drive ferro-magnetic layers, where a grain is about seven nanometers across. These grains are distributed irregularly across the recording medium. Albrecht says making them smaller means they are susceptible to thermal instability, with their charge altering as the temperature of the disk platter rises and falls. The MAFIN method is to use commercially-available silica nanospheres that are 25 nanometers in diameter.

They are blended into an alcohol-based solution which is put onto the drive platter's silica substrate. The alcohol evaporates and the nanospheres orient themselves into a regularly-distributed pattern, settling into tiny pits in the silica substrate, made previously with X-ray lithography. Albrecht believes this can be done in a large scale manufacturing process, saying: “I believe that self-assembly-based approaches have the largest potential because they are not expensive. They are very low cost."

A magnetic film, using an iron-platinum alloy with high magnetic anisotropy, is then deposited on the nanospheres using magnetron sputter deposition. The high temperatures involved in this will prevent glass substrates being used and ceramic ones may be needed instead. The curved nanosphere surface makes the cap curved as well. It forms a single magnetic domain, isolated from its neighbours, and won't exchange magnetic charges with them. The silica in the nanospheres is non-magnetic and so helps in the insulation between the magnetic caps. The direction of the magnetism in the caps provides binary ones and zeroes, and the cap may be tilted to optimise writing data.

The MAFIN project used "state-of-the-art magneto-resistive recording heads provided by Hitachi (HGST)" in its work. However the project team experimented with magnetising and reading the magnetised nanospheres using a probe tipped with a fine magnet.

The 25nm spacing between the nanospheres provides a 1Tbit/in2 areal density and Albrecht thinks this could be increased sixfold.

Chemists, physicists, engineers and materials scientists from nine European institutes began work on TERAMAGSTOR in 2008. It is headed by Demokritos, the National Centre for Scientific Research in Greece, and is a three-year project which will finish in April 2011.

The EU is interested in supporting the MAFIN and TERAMAGSTORE work because it has the potential to strengthen European's "position in many competitive and strategic fields, in particular, in data storage".

Albrecht says: "In Europe we don't have a real industry that produces hard drives. It's all in Asia and the USA. But we have manufacturers of deposition tools and expertise in sputter technology." ®