Google is testing a tool that lets you use multiple user accounts in the same browser, according to a bloggy report.

The unofficial Google Operating System blog provides a screenshot of the tool, which — at this point — only works with Gmail, Google Calendar, Google Reader, Google Docs, Google Sites, and Google Code.

The screen says that if multiple sign-in is enabled, offline Gmail is disabled. And when you visit a service that doesn't support multiple sign-in, the screen adds, the service will default to the account you signed into first. 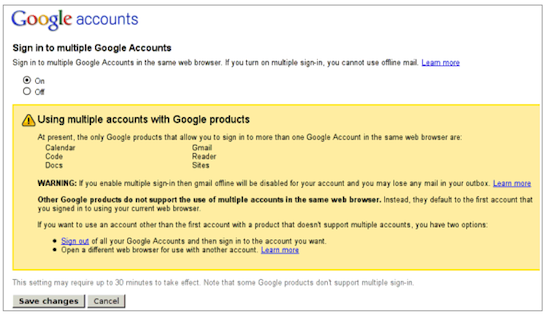 Asked to comment, Google said: "We have nothing to announce at this time." But in an email sent to GigaOm, the company seemed to indicate this is part of its effort to extend Google Apps accounts to additional Google services. "Back in May we announced that we will be rolling out changes to our infrastructure for Google Apps accounts, giving Google Apps users access to many more services," the company said.

"We’re currently testing this feature with many customers to get feedback on the user experience. We look forward to bringing this big improvement to the rest of our customers soon, but we have nothing further to announce at this time.”

Currently, with Google Apps, an organization can use a limited collection of services from a custom domain, including Gmail, Google Docs, and Google Calendar. But beginning this summer, you'll have the option of using a Google Apps account with everything else, including Blogger, the Picasa pic manager and sharer, Google AdWords, and the RSS-happy Google Reader.

All this said, the new multiple sign-in tool appears to be very different from the Google Apps accounts overhaul described in May.

Currently, it's possible to use a Google Apps account and a standard Google account in the same browser, thought its easy to confuse the two as you switch back and forth. The problem comes when you want to use two standard Google accounts — or two Google Apps accounts — in the same browser. There are kludgey workarounds for this — Chrome incognito mode, for instance — but there's no easy way of doing so. Your best option is to open multiple browsers. ®