Good printing - but there's a price to pay

Review This machine follows the same style lines as other all-in-ones in Canon’s range, with a large case in black and silver.

The ADF for the scanner is integrated into an angled surround which holds the control panel, and includes a feed tray which folds shut to clean up the look of the machine when it’s not scanning. 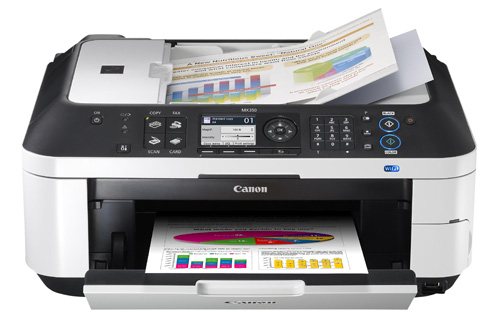 The controls are well organised, with illuminated mode buttons to the left and a fax number pad to the right, either side of a 62mm LCD. Canon includes its signature click-wheel for menu navigation.

In the heavily curved right-hand front edge is a hinged door hiding memory card slots, including a CompactFlash bay, and beneath that is a PictBridge socket which also works with USB Flash drives. Paper feeds from a near-vertical tray at the back to an output tray formed by folding down the front cover.

Canon quotes ISO figures for print speeds, which is refreshing, and gets quite close to what I saw under test, which is more so. The maximum black print speed was 6.9ppm, third fastest in the group, though this dropped to 2.5ppm for colour, which is well down the field.

Print quality is good, with clean, sharp black text, vibrant colours on plain paper and superb colour photos, given that it’s a four-colour machine. Copies lose little of the saturation of prints.

Running costs come out at 4.7p for black, the highest in the group, and 11.9p for colour, the second highest. The Pixma MX350 is only currently available from Argos, though with 750 stores in the UK, getting hold of one shouldn’t be a problem. 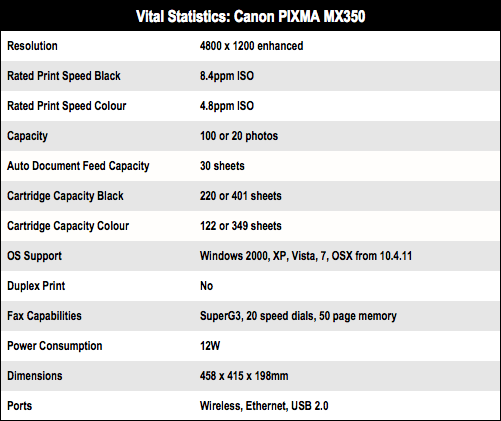