Seagate has introduced GoFlex Home as a home networked storage system. It is a single drive product with no protection against it crashing.

The latest iteration of Seagate's GoFlex product family will provide networked storage and media playing capabilities for home computer users. GoFlex Home is a 1 or 2TB drive mounted in a dock which connects via Ethernet to a domestic wireless router. The included Memeo backup software will backup data from up to three computers networked to the Wi-Fi router. The device is Time Machine-compatible and Macs can have their data backed up by either Time Machine or Memeo. 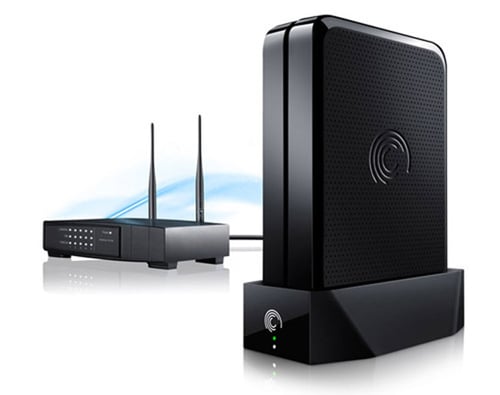 As Time Machine backup can be set up to only use a portion of the drive it can still be used for backup by Windows PCs. Files can also be directly copied to GoFlex Home by using the Seagate Dashboard facility, installed on Windows PCs as part of the GoFlex Home installation process. However Mac users must use the web-based Seagate Share facility instead. Windows users can choose to do it this way as well if they wish.

The product can serve media files to an DLNA-compliant device for playing on, such as high-definition TV screens. Suggested DLNA target devices are games consoles, the GoFlex Media Player and Seagate's FreeAgent Theater. Media files on GoFlex Home can be shared with other users by using the included Seagate Share facility. Once a file or folder set is nominated for sharing with a particular user that person is sent an email containing a unique URL providing browser access for them to the content.

This can be extended to iPhone, iPad and BlackBerry users with the optional Seagate Share Pro software. This can also integrate photos or files with Facebook and Flickr, and keep friends and relatives updated with the latest shared files using Integrated RSS (Really Simple Syndication) notifications.

GoFlex Home can have its capacity extended by connecting an external drive to its USB port. Alternatively the port can be used to hook up a printer which can then be used as a shared printer by other computers on the home network.

The product has a power-saving mode, putting the disk drive into an idle state after 30 minutes of no activity. The disk drive can be upgraded to a larger capacity drive by simply replacing the installed drive in the dock with a new one. However there is no facility to migrate the data on the original drive to the new one. The files on the original drive can still be accessed but only by remounting it in the dock.

As GoFlex Home is a single drive product then, if the single drive crashes, users have lost the data on it. There is no facility to backup the GoFlex Home device's data either to another drive or to the cloud. In this respect it's best to treat it as a backup device and not as the single place to store files used by connected computers.

As an observation a dual-drive model could provide mirroring-based data protection and would enable access to old data if a larger replacement drive were installed, or a migration process if a pair of larger drives were installed, one at a time.

You cannot use the 3TB FreeAgent Go drive in the device - it does not fit.