'Bob, bless him, is the nearest thing to commercial space' 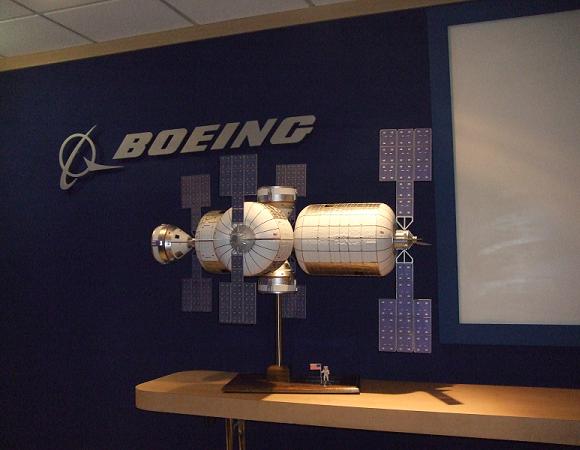 Overheard at the briefing: 'There will definitely be less Krazy Glue involved in the real one'

CST-100 could carry up to seven passengers or cargo to manned space stations in orbit. It would be aimed at NASA's new Commercial Crew Development (CCDev) initiative, intended to contract the business of moving US astronauts to and from low orbit out of NASA and into the private sector. Commercial crew launchers are intended to replace the space shuttle fleet for carrying crew to an from the International Space Station (ISS), while NASA moves forward with "deep space" manned missions beyond the Moon.

According to Boeing, however, NASA CCDev ISS work on its own wouldn't merit the company developing a new people-carrying launcher.

"There needs to be more than one place to go," says Boeing's Roger Krone. "This is not viable if the only place is ISS."

According to Bigelow and Boeing, if they are offered adequate amounts of CCDev cash, CST-100 could be making test flights in 2014 and carrying paying customers to Bigelow stations in 2015. At the moment, however, Boeing has only a small $18m contract with NASA under which it is carrying forward design work with Bigelow Aerospace as a subcontractor.

There is scepticism both within NASA and among politicians in Washington as to whether private-sector craft are ready to carry astronauts safely. However Boeing argues that this viewpoint is engendered more by upstart newcomers such as Elon Musk's SpaceX firm with its brand-new rocket and capsule designs.