IBM has launched its next-generation System z mainframe, the zEnterprise 196. Now we will get to find out, in the next few quarters or so, if the mainframe business still has some legs and can grow or the Great Recession of 2008 and 2009 has permanently knocked it down a peg or two.

At the launch event today in New York, IBM's top brass did a lot of jawboning about the significance of the zEnterprise 196 system, which marries a new quad-core processor and a slew of new technologies together as well as Power7 and x64 blades into a hybrid computing platform. Both Rod Adkins, senior vice president of the Systems and Technology division that has been merged into the newly created Systems and Software Group, and his boss, Steve Mills, who has run Software Group for many years and now has control of all systems and software at Big Blue, made much of the fact that the zEnterprise 196 is hybrid machine – and one that brings mainframe attributes to distributed systems.

"This is a bigger, badder, bolder machine," explained Adkins. "[But] this is really the industry's first multiarchitecture platform." And Mills said much the same. "There is nothing in the market like this, nor will there be in the next ten years," Mills declared in the emphatic and clear way he speaks. (Mills is by far the best speaker of all of IBM's top brass, and if he were younger, would no doubt soon be in charge of Big Blue).

While this is the kind of hyperbole you expect at IT announcements, that doesn't make what Adkins and Mills said strictly true. Mainframe rival Unisys has been selling ClearPath mainframes with x86 and then x64 processors alongside their Sperry and Burroughs mainframe engines for more than a decade.

Unisys even runs its MCP and OS 2200 operating systems in emulation – on top of Windows or Linux on x64 iron, respectively – if customers want to do that. That's a hybrid system. Since 1994, IBM's own AS/400 had internal x86 and x64 co-processors plugged into the system bus of the CISC and then PowerPC RISC systems. These co-processors could run Windows, OS/2, NetWare, and Linux and stored data on the same disks as the AS/400. IBM abandoned the internal x64 co-processors when it merged its AIX and OS/400 lines three years ago. There are no doubt many other examples of hybrid systems, which I am sure readers will remind me of in comments.

So what is all this hyperbole about hybrid architectures? First, it solves some real customer needs, this coupling of disparate servers and putting it all under control of the rock-solid IBM mainframe environment. But perhaps more importantly, by putting Power and x64 iron under the skins of its mainframe servers, IBM can from here on out make mainframe sales look larger than they might otherwise be. Now, instead of selling separate BladeCenter chassis and Power or x64 blade servers that get put into the System x or Power Systems buckets every quarter, IBM will be selling zBlade Extension modules with blade servers that get put into the System z bucket. Clever, isn't it?

Moreover, the tighter coupling of mainframe, Power, and x64 systems into a single product makes it harder for Hewlett-Packard, Dell, and Fujitsu to sell x64 racks and blades into mainframe shops because they won't have the Uniform Resource Manager special sauce that IBM is adding to its Systems Director tools with the z196 machine. 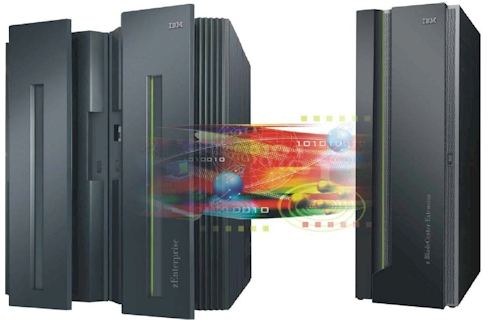 A similar hardware bundling strategy certainly worked for the AS/400 business in the 1990s, when IBM started selling disk storage arrays tucked inside the boxes instead of outboard 933X disks that were traditionally sold with System/3X and AS/400 midrange gear. These 933X disks were sold by IBM's Storage Division, not the AS/400 Division, so the AS/400 Division didn't get credit for the sale. But once it switched to internal disks, suddenly AS/400 hardware sales stopped dropping.

But not really. Processor sales kept falling right along their predictable trend as Unix and Windows servers started eating into the midrange. A little further down the road, IBM treated its 5250 protocol (which drives transactions to and from green screens) as if it were hardware to pump up its hardware sales figures, when everyone knew it was software. (The company shifted back to selling it as software a few years ago after a company called Fast400 figured out how to unlock the features, in a way that is analogous to what Neon Software is doing to move workloads from mainframe engines to zIIP and zAAP accelerator engines on IBM's prior generations of System z9 and z10 mainframes).

There's more to the zEnterprise 196 than this hybrid computing stuff that IBM it talking about at length today. There is, as El Reg previously reported, a substantially upgraded mainframe at the heart of this machine. This machine, said Adkins, was the result of $1.5bn in research and development spending, with more than 5,000 IBMers working from 18 different labs participating in the project; 30 key mainframe customers also took part in the design of the z196 machine.

This is an astounding amount of money. One wonders how IBM is allocating its R&D budget and how hardware and software technologies developed for the z196 will drift over to its other systems, giving them functionality for very little incremental cost because the mainframe foot most of the bill.

As expected, the zEnterprise 196 is based on a four-core processor that runs at 5.2 GHz and the system is based on a four-book system configuration with six of these four-core processors on a single book. That gives a total footprint of 96 cores in a single system, but the z/OS and Linux operating system can only span 80 cores in a symmetric multiprocessing configuration.

The z196 processor delivers around 1,200 MIPS per engine and about 50,000 MIPS in a single system image across those 80 cores - a tad bit higher than the 1,100 MIPS and 48,000 MIPS I expected, but within reasonable guesstimates. There are 15 different subcapacity configurations for the zEnterprise 196, and five different models: M15, M32, M49, M66, and M80. The number in the designation shows the maximum number of cores each machine can dedicate to client workloads, whether they are regular engines for running z/OS or set up as specialty processors for running Linux (IFLs) accelerating DB2 databases (zIIPs) or Java and XML workloads (zAAPs).

The zEnterprise 196 supports up to 3 TB of DDR3 main memory that has been given RAID protection, much as disk arrays have - something IBM calls RAIM memory, short for Redundant Array of Independent Memory. (We'll be digging into that as soon as we find out more).