The Daily Mail has worked itself up into a right tizz over last Friday's episode of ITV1 soap Emmerdale, in which a chalked shopping list was seen to contain the items "jam rags" and "pile cream". 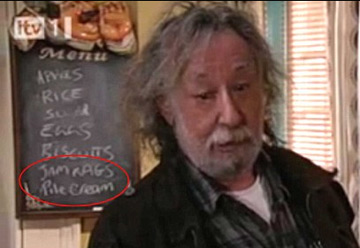 PA explains that the outrage was "visible during Friday's episode as a drunk Shadrach Dingle stumbled into his nephew Marlon's kitchen".

Vivienne Pattison, director of campaigning group Mediawatch, was on hand to fulminate: "I think it's vulgar and inappropriate. 'Pile cream' I can deal with. It was the use of 'jam rag' that got me. I can't imagine a woman writing that. It's really vulgar and unnecessary."

ITV1 quickly issued a statement which read: "A shopping list featured in the background of a scene on Friday's episode of Emmerdale which included colloquial terms that some viewers considered inappropriate. We are looking into the matter and we apologise to any viewers if they were offended."

Sadly, this came a bit too late for Middle England, which was already shaken to the decent, upstanding foundations on which it rests. Traumatised Staffordshire mum-of-two Jean Walker recounted: "I was stunned when my son, who is only seven, turned around and asked me what a jam rag was. It's not the kind of thing you want your kids seeing, so it was disappointing to see it on a programme like Emmerdale just after dinner.

"You hear phrases like that used in the street or in the pub sometimes, but to use it in front of millions as part of a TV soap is a pretty silly thing to do."

An equally-rattled Sharon Kennedy, of Brum, reported: "I couldn't believe my eyes when it appeared on screen - it's not the kind of language you expect to appear in one of our oldest soaps. I had to cover my young son's eyes because I didn't want to have to explain that kind of crass language to him at such a young age.

"Maybe it was some kind of prank played on the cast by members of the production staff. If that was the case, I didn't find if particularly funny."

AP concludes that, despite the scandal, watchdog Ofcom "said it had received no complaints about the episode". ®

Also, JunoCam malfunctioned again, time to get new kit up there
Science31 Jan 2023 | 2

Chips were just Epyc, but now they're the bomb and Intel's inside the tent too
Systems31 Jan 2023 | 1

Schools' laptops are out if this one gets around, tho beware bricking
Security30 Jan 2023 | 4

Salary report shows OKish pay, plus the possibility of getting ripped off and the whole prison thing
Cyber-crime30 Jan 2023 | 4