I had varying results with the outdoor settings. The only difference is a damping-down of the flash (used indoors, the 'clear' setting gave a very moody-looking dark shot). I took a picture of a willing model in full morning sunlight on the 'fine' setting and found he almost disappeared into the white wall background. 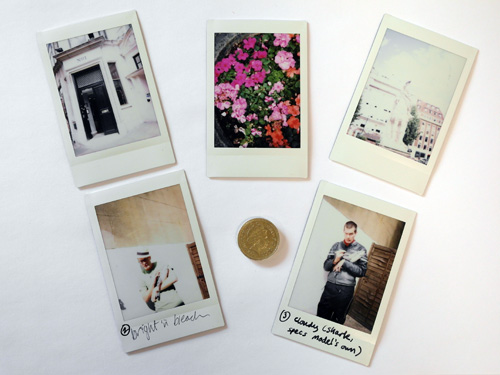 I got a better result with the 'cloudy' setting - same model by the same wall the next day, when it was overcast. But there was still a lot of bleaching in evidence. There isn't much to choose between the 'fine' and 'clear' settings - the former is for 'bright' conditions, says the manual, and the latter for 'very bright'. It seems superfluous to have both, and I would have been happy enough with just three settings - indoor, cloudy, and bright.

The camera by its nature requires a lot of trial and error, but I'd suggest night shots are going to have the most consistent results while outdoor will be more hit-and-miss. Results are good whether you take vertical or horizontal shots (vertical is the default), and focus is always good; close-ups don't come out so well (and you run the risk of blinding your subject - risky when your subject is a large, irritated dog), but this will surely provide plenty opportunity for comedy.

I got good results in general from a trip to a festival, where the appearance of the 300 was always greeted by a chorus of "oh, I thought they'd stopped making them". To say it's a conversation piece is an understatement. A shot of a gig taken in a shady tent with the indoor setting came out well, and one shot of some festival-goers on the same setting in a very dark tent later came out perfectly.

A couple of daytime shots proved that the fine and clear settings don't always lead to a bleachfest if you avoid full sunlight (one shot taken from the top of a ferris wheel in the middle of the day was unusable because of this). And yes, the Thelma & Louise-style arm's-length self-portrait is possible too. 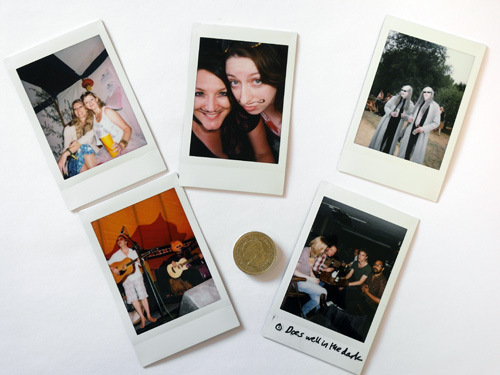 The counter did let me down once, cheerfully informing me I had six shots left when in fact the film was spent, necessitating a lot of bothersome clicking before I could change it. It may be best not to rely on it, and instead remember to count to ten - although it worked fine for the second film I used.