Burst sunspot could see Northern Lights over UK, US

Astroboffins are warning that a mighty "eruption" of superhot plasma has been blasted out of the Sun directly at the Earth. The plasma cloud is expected to reach Earth beginning tomorrow today, possibly causing strange phenomena - including a mighty geomagnetic storm which could see the Northern Lights aurorae extend as far south as Blighty or the northern USA. 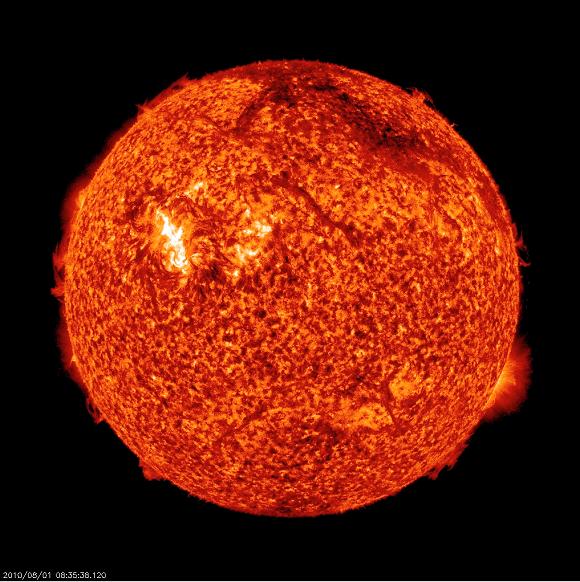 According to boffins analysing results delivered from NASA's Solar Dynamics Observatory satellite, Sunday saw a massive convulsion involving almost the entire face of the Sun facing Earth. The event was apparently centred on Sunspot 1092, a huge solar pimple so large as to be visible without the aid of a telescope.

It appears that the sunspot may have triggered a huge "coronal mass ejection" in which huge amounts of superhot plasma were spurted towards Earth accompanied by solar flares, tsunamis, magnetic filaments and other sun-wracking upsets across half the sun's surface.

"This eruption is directed right at us, and is expected to get here early in the day on August 4th," says astronomer Leon Golub of the Harvard-Smithsonian Center for Astrophysics (CfA). "It's the first major Earth-directed eruption in quite some time."

Normally a blast of radiation like this could be expected to wipe out much of the human race, but fortunately we are protected by the Earth's magnetic field. Instead the deadly solar plasma is expected to stream down the planetary field lines towards the poles, crashing into oxygen and nitrogen atoms in the atmosphere and so lighting them up to form aurorae - the so-called Northern Lights.

Golub and his colleagues believe that the aurorae may be so intense as to be visible from the northern United States and other countries such as the UK which are normally too far south to see the Lights.

"We got a beautiful view of this eruption," enthuses the astronomer. "And there might be more beautiful views to come, if it triggers aurorae."

The Sun's activity generally rises and falls on an 11-year cycle: the last peak occurred in 2001, but since then the star has been going through an unusually prolonged calm spell. We've been overdue for some more action for several years, and Golub and his colleagues consider that Sunday's outburst may be a sign that the Sun is "waking up". ®