Let there be light… and sound

Review While there are plenty of solar chargers to keep gadgets going in the great outdoors, sun-powered iPod speaker docks are rather thin on the ground. Step forward Californian company Etón Corporation, which specialises in portable and often eco-friendly products such as wind-up and solar radios. 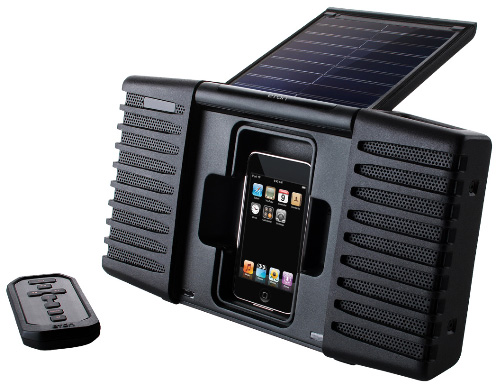 The Soulra is a sturdy system encased in rubberised aluminium and IPX-4 rated to survive splashes and spraying from any angle, but only if its solar panel – which doubles as a cover for the iPod enclosure – is down.

Its solar cell is monocrystalline, which is slightly more efficient than other silicon semiconductors for the inevitable cloudy weather that will greet the Soulra in the UK, in contrast to the sunnier climes of the brand’s HQ. The panel charges a built-in, but replaceable lithium-ion battery that provides about four hours of continuous use, or longer if it stays out in bright light for a top-up. It charges your iPod or iPhone while doing so, too.

Though it’s not recommended for optimum performance, I found that the cell also charges indoors if facing a large window on a bright day. Sadly the panel doesn’t swivel to aim in absolutely any direction, you’d need to turn the whole device around.

If natural light is lacking and the battery is exhausted you can use the supplied adaptor to recharge from dirty old electricity. For this it uses 7W to charge, or roughly 10W when also energising an iPod. There is an auxiliary input for other MP3 players and phones but it won’t charge these and you’ll lose the track pausing and skipping provided by the Soulra’s remote. 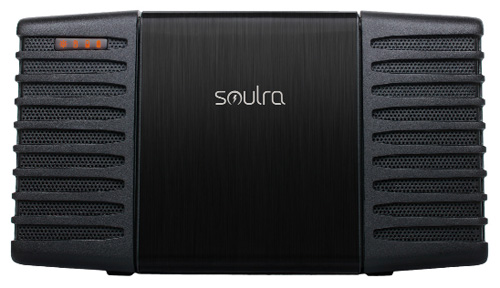 Splashproof with its cover down – ideal for mishaps with hose-pipes or barbecue sauce.

LEDs show you at a glance if it’s charging by sunlight and when the battery is full. The LEDs also give an idea of how much juice remains. I tested the Soulra during a spell of mixed weather and though it charges reasonably well in sunshine, it naturally slows down in overcast conditions.