Microsoft back in the browser wars

Review The browser wars have taken a fresh twist with Microsoft's release of the fourth - and final - preview of Internet Explorer 9 before the beta in September.

The notable features are that it has improved standards support to the extent that it scores 95 per cent on the Acid 3 CSS test, that its JavaScript and graphics performance is way ahead of previous versions, and - finally - that it implements enough of the emerging HTML5 specification to raise the hope that stuffing rich content into browser plug-ins might not always be necessary.

The preview is not a complete browser, just a rendering window with a minimal menu for navigation, but it is actually a lot of fun. It is also worth pressing F12 to see the excellent debugging and profiling tools.

The IE Testdrive site has been assembled with care and humor, and shows off some remarkable statistics. On my box the Psychedelic demo, which uses hardware-accelerated graphics drawn to an HTML5 Canvas element, does 1,799 revolutions per minute. Google Chrome 6.0 (a developer build) only manages 60.

The technical story is that everything in IE9 is hardware accelerated. "IE9 offers consistent, fully hardware-accelerated text, graphics, and media, both audio and video," says the IE blog. In addition, there is a new JavaScript engine, codenamed Chakra, that is part of IE itself, whereas earlier script engines are COM libraries. Chakra also does background native code compilation to improve performance. 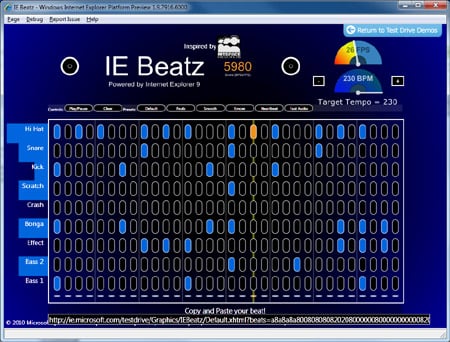 Why does IE9 only get to 95 per cent on Acid 3? According to Microsoft web product manager Mark Quirk, it comes down to SVG fonts and SMIL presentations. Microsoft is implementing Web Open Font Format (WOFF) and reckons there is no point in doing SVG fonts as well; and the SMIL feature is not needed because of similar features in CSS 3. The 95 per cent figure is unlikely to improve in the final release.

Although this is the final preview before beta, the IE9 user interface is still under wraps. Microsoft's intention is to make September's beta good enough to be usable by a broad range of users - "anyone who is comfortable installing and uninstalling applications," said Quirk. The target release date has not been announced, but Quirk did say "not too long" after the beta. A reasonable guess would be early 2011.

There are complex compatibility issues for web developers. One reason IE users sometimes get a poor browsing experience is when web sites test for IE and deliver lower-grade content. Microsoft is encouraging developers to test for features rather than browser versions, so that users get the best possible results.

The inclusion of large parts of HTML5 in IE9 is a big deal. In particular, the Canvas element gives developers full control over what is rendered, so that any kind of effect or user interface becomes possible. The Beatz example on the Testdrive site is a good example, a music-making application that looks nothing like a web page, and that shows off audio as well as graphics.

The awkward question: if Microsoft can do all this in HTML, why bother with Silverlight? I put this to Quirk, and he said: "As the number of the things you can implement with HTML clearly goes up, the need for Silverlight and Flash goes down." He added, though: "The value that those players add needs to go higher."

The truth is that even if IE9 delivers everything it promises, older versions will persist in use for years, and plug-ins that offer developers a consistent cross-platform runtime will remain important.

It is still a delicate issue for the company. In fact, it goes to the heart of the matter. I recall being told by Microsoft, back in the early days of IE6, that browser development was slowing because only internet-connected desktop applications could deliver the richness users required. The side-effect, of course, was Windows lock-in. It is a strategy that gradually unravelled, thanks to the efforts of Mozilla, Google and others to advance HTML standards and get users onto alternative browsers.

The outcome is that Microsoft has been forced back into the browser race. IE9 shows that it can do a great job, partly because it can optimize everything for Windows.

Now, though, it faces the opposite problem - that the capabilities of cross-platform browser applications may make developing for Windows or even Silverlight unnecessary. It is still the right thing to do, and if version 9 does not bring Windows users back to IE, then nothing will. ®