Ofcom has an interesting new definition of what constitutes a "radio listener". It now includes four-year-old children. And at a stroke, DAB radio's prospects suddenly look a lot healthier.

This is odd, because the radio industry counts listeners aged 15+ as its benchmark. This is the qualification threshold used by RAJAR, the ratings body jointly owned by the BBC and commercial radio operators. When the graph is adjusted to the more standard metric, the five stations count falls to three.

In addition, BBC World Service is listed as "digital-only", even though it can be heard in the UK through analogue on medium wave (648Khz) and long wave (198), although the latter is actually Radio 4. Make that two, then.

It's just one of several dubious statistical shenanigans highlighted by analyst Grant Goddard; you can read his full breakdown here.

Ofcom also used data from a survey that asked if anybody had ever used digital radio. This was then used to create results demonstrating how many people use digital radio - in the present tense - now. 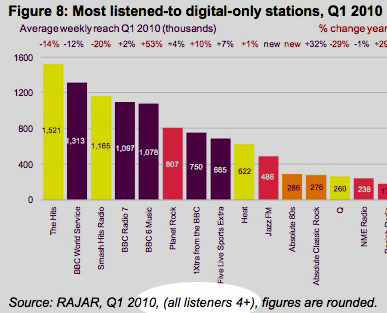 There's a serious point here, Goddard points out. The Digital Economy Act specifically states that this Ofcom document should be the basis for policy decisions on the digital radio switchover. But the evidence that Ofcom puts forward isn't worth the paper it's printed on. He concludes:

"Given that Ofcom has had the luxury of several years to prepare this first Digital Radio Progress Report, the result is a travesty. It should not be the regulator’s role to selectively highlight and distort data that support its own policies in a document specifically requested by government in order to inform a parliamentary decision on digital radio switchover.

"We deserve better from our public servants."

If DAB radio now needs to enlist toddlers to boost its fortunes, the unborn and the dead can't be far behind. ®