As Earthlings have been going unconcernedly about their business this week, the biggest radiation storm for a decade has been lashing the planet.

A mighty "solar tsunami" event on Sunday caused vast clouds of particles to belch from the Sun in our direction, and these have been piling into the planet's magnetic field since early Tuesday night UK time, causing the northern lights to flare wildly. 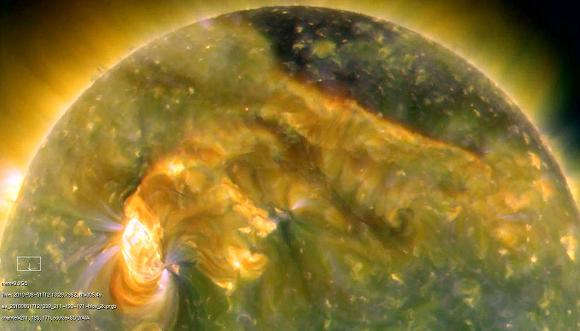 Were anyone to be caught outside the Earth's protective magnetic field during such a particle hurricane the consequences would probably be fatal; fortunately, however, no human being has travelled beyond our safe geomagnetic harbour since the Apollo moon missions of the 1970s. Astronauts in low orbit, including the crew of the International Space Station, are almost as safe as we are on the ground.

The "coronal mass ejection" events of the weekend were, however, thought likely to lead to spectacular aurorae visible much further south than usual in the northern hemisphere as arriving sun-belch particles poured along the planetary field lines into the polar regions and crashed into the atmosphere, so boosting the "northern lights"*.

The Harvard-Smithsonian Centre for Astrophysics (CfA), which has been following the exciting sun-storm this week, says it has received "positive reports" of good aurorae from such relatively southerly locations as Michigan, Wisconsin, Denmark and Germany, where the northern lights aren't generally visible. Many other locations, disappointingly, were clouded out last night.

According to the CfA boffins, further ion downpours can be expected at around 5pm this evening, then at 1am tomorrow morning, then at around 7am tomorrow (all times UK summer). For Brit readers fortunate enough to have cloudless skies (the forecast says that a lot of eastern England may be in luck), the 1am gust offers the only remaining chance of any visible auroral action.

Even in daylight, however, it's possible to follow events using the US National Oceanic and Atmospheric Administration (NOAA) plot of the current "auroral oval" - which at the time of writing extends weakly over much of the UK. Proton rainfall density can also be viewed here.

There's also a gallery of aurora snaps from the storm so far, not especially amazing to be honest, here. ®

*And no doubt the aurora australis to some extent also, but the south pole is angled away from the Sun at present - and in any case the southern lights are visible only in sparsely-populated Antarctica (or from space in some cases).