Apple has apparently lifted the look-and-feel of an iPhone app from German developer FutureTap and used it in a software patent application, putting that developer in a sticky situation.

"I can't really judge whether the inclusion of a 1:1 copy of our start screen in someone else's patent is legal," wrote FutureTap founder Ortwin Gentz in a posting on his company blog. "I just have to say, it doesn't feel right."

How apparent are the similarities? Judge for yourself: 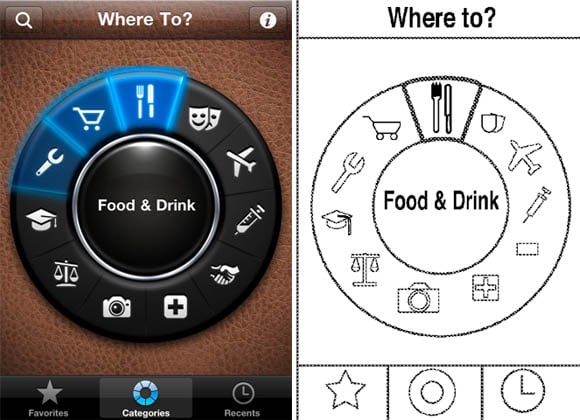 That's FutureTap's app on the left, and Apple's patent illustration on the right. Notice any parallels?

Gentz says that the four-and-a-half-star-rated iPhone app in question, Where To? - GPS points of interest, was "launched on day 1 of the App Store" — that'd be July 10, 2008. Apple's suspect patent application, "Systems and methods for accessing travel services using a portable electronic device," was filed on October 1, 2009, and published last Thursday.

Apple's use of his app's UI has put Gentz in an uncomfortable position he claims. "We're faced with a situation where we've to fear that our primary business partner is trying to 'steal' our idea and design," he alleged.

Gentz's blog posting paints him as a man torn between currying Cupertino's favor and standing up to them: "We've always been more than grateful for the platform Apple created. And, in fact, still are," he writes. "However, we can’t ignore it if the #1 recognition value of our (currently) only app potentially is under fire."

To his credit, Gentz contacted Apple about Cupertino's demonstration of the "imitation is the sincerest form of flattery" adage. To Apple's lack of credit, they have not responded to his inquiry — even though, as Gentz notes: "Actually, one of the reasons we waited nearly a week with this post, was to give Apple time to respond."

Apple didn't immediately respond to our request for comment, either.

The legal implications are murky. Our reading of Apple's patent application shows it to describe, in part, many of the capabilities of Where To?, but the exceptionally wide net that the filing casts encompasses far more functionality.

In addition, it's clearly arguable that Apple may have used Gentz's UI for exemplary purposes, with no intent to claim ownership of the Where To? look and feel.

That said, if Apple did simply bag the UI without asking Gentz — or even notifying him — it would show a cavalier disregard for a developer's work and his investment in it.

Perhaps this is a mere tempest in the proverbial teapot. Or perhaps Gentz will receive an email from Steve Jobs that's a paraphrase of a message the Apple CEO sent to another developer, one who was concerned with seemingly arbitrary App Store shenanigans: