Updated The UK and green media is alive with reports of a "poo powered" car, dubbed the "Bio-Bug", developed to encourage sustainable motoring. But what's the real story? 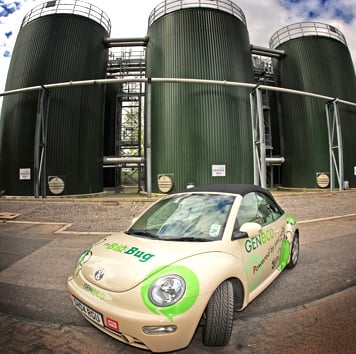 "Either way, what I hope they realise is that this is exactly the kind of innovation we now need for a more sustainable world – and those directly involved should be proud they’re making a small but significant contribution to it everyday!"

In fact the Bio-Bug is simply a VW Beetle converted to run on Compressed Natural Gas (CNG), in other words mostly methane stored under pressure. It's more normal in Blighty to run vehicles on Liquefied Natural Gas (LNG), where the gas has been chilled into liquid form and thus doesn't require a heavy, bulky pressure vessel for storage. LNG is also denser, taking up less room. However CNG is easier to produce as no chilling/liquefaction stage is required. CNG is used to run some fleet vehicles here in Blighty, and in some countries is very popular as it is often a lot cheaper than petrol or diesel.

There isn't normally anything particularly green about running a vehicle on natural gas, which is after all a carbon-based fossil fuel. The difference here is that the CNG used to run the Bio-Bug is produced at Wessex Water's Avonmouth sewage plant.

Avonmouth already runs its "digesters" and other processing machinery using combined-heat-and-power plants running on poo biogas, and indeed generates a surplus of electricity which it sells to the National Grid. But it seems that there is still biogas left over after the plant's own requirements are met, which would otherwise simply be burned off as waste (venting it to atmosphere without burning would be a major eco-crime, as methane is a hugely more powerful greenhouse gas than CO2).

“With the surplus gas we had available we wanted to put it to good use in a sustainable and efficient way," says Mohammed Saddiq, general manager of Wessex Water subsidiary GENeco, which aims to monetise the company's sewage-derived products.

“We decided to power a vehicle on the gas offering a sustainable alternative to using fossil fuels which we so heavily rely on in the UK."

Next page: Why not just sell the gas? And why did the taxpayers have to cough up? And who cares? This is never going to be a big deal
Page: