Updated Apple has patched a critical iOS  vulnerability that allows attackers to install malicious apps on iPhones, iPads, and iPod touches by doing nothing more than luring victims to a booby-trapped website or sending them a tainted email.

The update plugs a hole in Apple-designed document-viewing software that allows attackers to inject code of their choosing into PDF files. By default, all three devices open the documents automatically when they are encountered in emails or on websites, leading to a classic browse-and-get-hacked exploit. The Foxit document reader was vulnerable to the same flaw, until it was patched last week. Adobe has said its Reader application is unaffected.

A second vulnerability in iOS allows attackers to break out of the iOS security sandbox and access to the OS's root account, which has unfettered access to the device.

The vulnerabilities have been exploited for weeks on Jailbreakme.com, a website that allows people to jailbreak their devices by flicking a slider on the home page. There has been nothing stopping people from carrying out more malicious attacks, but so far there are no known reports of that happening.

In addition to patching the PDF flaw in iOS, Apple has also bolstered its sandbox by nixing an integer overflow in the handling of what's known as IOSurface properties. The whole point of the design is to mitigate the severity of buffer overflows and other garden-variety software bugs by containing application processes inside protected walls that can't access sensitive parts of the OS.

There's no word of an accompanying update for Mac OS X. It remains unclear if that OS is unaffected or Apple hasn't gotten around to issuing a fix yet. 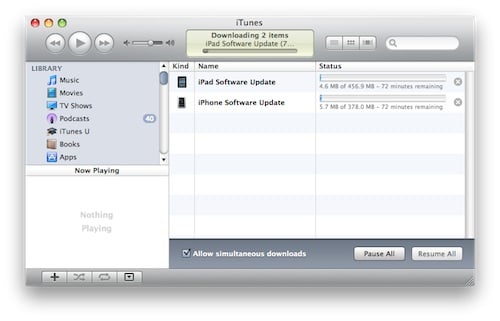 Apple's advisory suggests that users install the patch immediately, but it may make sense to wait until there's an ample amount of bandwidth available. The iPad update is a whopping 456.9MB in size and the iPhone download is 378MB. ®

This article was updated to correct erroneous information about the status of the sandbox patch.