Oracle unveiled an overview of its Sparc plans on Tuesday, and in doing so proved to anyone not yet convinced that things are different in the Sun Microsystem universe now that Larry Ellison & Co have taken charge.

If the past decade has taught us anything, it is that Sun Microsystems was a little too cavalier and ambitious with its roadmaps for processors, servers, and storage. Sun talked up its tech constantly, like Intel and AMD do, in an effort to win business and pump up its stock price.

As Sun's new owner, Oracle will not be as foolish about product roadmaps — at least not publicly — and will present only the barest amount of data needed to make people believe that it is indeed investing in the hardware and software businesses that it took control of when it ate Sun in January.

Oracle may not even make its product roadmaps readable, as we all learned at the Oracle systems strategy update event hosted Tuesday by John Fowler, executive vice president of Oracle's Server and Storage Systems group.

Below is the key system roadmap that Fowler displayed, exactly as it appeared on your Reg reporter's screen — and no, my machine is not to blame; the instant-message queue running alongside the webcast had plenty of people complaining that the slides were illegible, so this was all Oracle's fault. Which is yet another proof that you need to test your code before you go live. 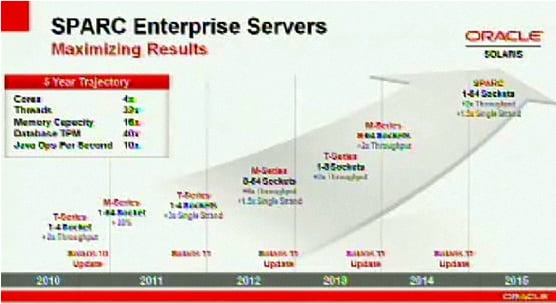 2016 or bust: Oracle's Sparc systems roadmap (click to enlarge — though not to improve)

Oracle did not make Fowler's presentation available on its website as we go to press — it appears to be some kind of surprise to Oracle's PR team that customers, analysts, and journalists might want a copy of it — but apparently a replay of the Webcast and a downloadable presentation will be available by Tuesday's end.

Fowler opened up his chat about Oracle's systems business by reminding everyone that Sun Microsystems got its traction in the data centers of financial institutions, telecommunications companies, and service providers who all took an early shining Sun's RISC/Unix servers. "This is one of the most exciting areas to build new technologies," Fowler explained, adding that the reason why Sun sold so much gear to these companies is because it provided a rugged system.

With the Oracle acquisition of Sun, Oracle is committing to providing "complete, open, and integrated" systems; the open part means allowing other operating systems to run on Oracle iron and allowing Oracle software to run on other iron.

But in addition, said Fowler, Oracle was going to "lean in" and "do the extra engineering" to tightly integrate Oracle and Sun application and systems software with Sun hardware, focusing on giving the integrated stack higher performance, more reliability, better security, easier management, and higher quality.

One example of the "engineered systems" that Oracle will continue to develop and bring to market is the Exadata V2 online transaction processing and data warehousing appliance, announced last fall, which combines Sun server and storage hardware and Oracle's database and storage software, all optimized for the Sun iron.

The Sparc system roadmap shown above might be blurry, but what Fowler said was not: Oracle is committing to the Sparc platform doubling its application performance every other year.

While Fowler did not say this, it stands to reason that that doubling of performance will only come on the engineered systems variants of the Oracle hardware platform, the ones with all the tweaks and tunings to make the Oracle stack sit up and bark.

Fowler, meanwhile, did take a jab at those who only talk about CPU-level performance: "Most customers in the enterprise space do not buy processors. They buy systems." And therefore, Sun was focusing on the system-level performance, and specifically would be designing its future Sparc platforms to goose application performance.