Over a third on hold

If, as is rumored, Verizon will end AT&T's exclusive US hold on Apple's iPhone beginning in January, it may mean big trouble for Big Phone.

That's the conclusion reached by a survey released Monday by the market-research firm Morpace, which found that 34 per cent of current US iPhone users are waiting for the überpopular handset to become available through another carrier before they upgrade. 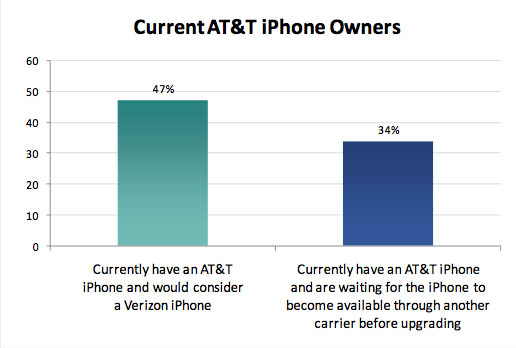 This chart should cause some trepidation in Big Phone's executive suite (source: Morpace)

For "another carrier", read "Verizon", the US wireless leader that has been the subject of an ongoing series of rumors of an upcoming iPhone deal — rumors that have gained credence in recent weeks.

According to Morpace, the reason for iPhone users' reluctance to sign another contract with AT&T in order to upgrade is simple: "A sizeable percentage of AT&T's iPhone customers are known to have become dissatisfied with its carrier's service and/or data plans, including network coverage, dropped calls and other issues."

However, in her thorough coverage of the Morpace report, Cnet's Marguerite Reardon reminds us that although Verizon subscribers "continue to give the company high marks in terms of satisfaction for its network," they're less generous when it comes to its customer service.

Reardon reminds us that another recent survey found that when questioned about satisfaction regarding customer-service calls, users Verizon placed dead last, behind AT&T, Sprint, and T-Mobile — even though the company had been number one as recently as the fourth quarter of last year.

She also points out that both AT&T and Verizon have nearly identical "churn rates", meaning the percentage of users who jump from their service to another: 1.27 per cent for Verizon versus 1.29 per cent for AT&T in the second quarter of this year.

But Morpace's survey indicates that those rates may fall out of balance if — when? — Verizon begins offering the iPhone in the US.

After all, in yet another recent survey asking iPhone 4 owners what they liked least about their Jobsian handsets, the top complaint was "requirement to Use AT&T's Network". Reasons numbers three and four were also Big Phone related: "coverage/speed/quality of AT&T's 3G network", and "excessive dropped calls".