The USA's new "fractionated" swarm satellites - in which groups of small wirelessly-linked modules in orbit will replace today's large spacecraft - will be able to scatter to avoid enemy attacks and then reform into operational clusters. 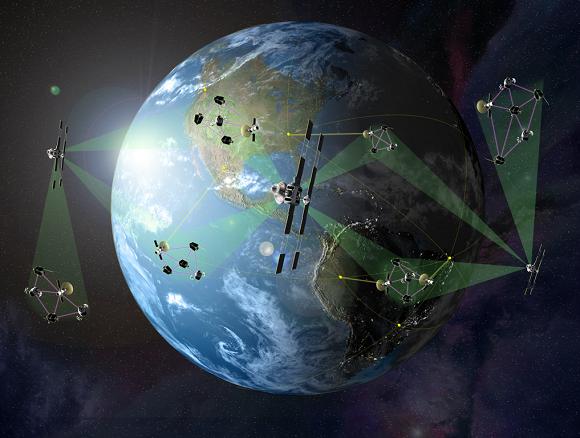 Trying to knock this down will be like punching clouds.

Defensive cluster scatter and regather maneuver. Demonstrate the ability of every module in the cluster to egress from a 20 km diameter “threat sphere” within 5 minutes. The modules must subsequently regather into a cluster configuration following the defensive scatter.

It has previously been specified that the F6 swarmsat cluster must be contactable even when out of line-of sight from US ground stations or other military comms platforms. British satcomms firm Inmarsat was recently awarded a contract to supply the trial F6 swarm with constant broadband access via commercial satellites.

The ability to contact an F6 swarmsat at any time would allow its controllers to order a "defensive scatter" on detection of a threat such as an antisatellite weapons launch or an approaching unidentified spacecraft. Such detections might be made by the various new space-warning systems being set up by the US, or by existing methods.

Much though active space warfare - including attack on another nation's spacecraft - is strictly forbidden by international law and treaty, it would seem that the USA intends to be ready for it anyway. ®