Hints are emerging that the Royal Navy's new aircraft carriers may be equipped with innovative electromagnetic catapults in order to operate cheaper aircraft as part of the ongoing, behind-closed-doors UK defence and security review/cuts process. 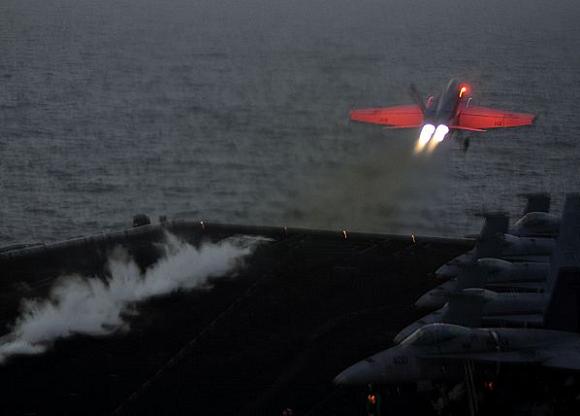 In particular, reports have emerged in the defence trade press that significant, "unprecedented" numbers of RN (Royal Navy) Harrier pilots have been sent to the States to train in catapult takeoffs and tailhook arrested landings. A pilot or two going on exchange to the US Navy is normal, but it seems that the UK MoD may at the very least be seeking to keep options open.

Under current plans, HMSs Queen Elizabeth and Prince of Wales are to be built without catapults for launching aircraft, though space has been left in the designs for such machinery to be added if required. The idea was that the ships would be equipped mainly with F-35B supersonic stealth jumpjets, the aircraft which is to succeed the venerable and famous Harrier in the forces of the Western world. A jumpjet can make a takeoff from a "ski-jump" ramp and then land vertically having burned fuel and expended weapons, meaning that it needs no catapult launch or arrester wires for landing.

The F-35B is now at last in flight testing, but it has suffered from development delays and probable cost increases. As the world's first aircraft to combine vertical thrust, stealth and supersonic speed it was always going to be expensive; now it seems likely that it will be unaffordably expensive for a UK Ministry of Defence (MoD) whose spending plans have long been out of line with its budget, and which is now facing cuts of as much as 20 per cent.

Various schemes have been discussed, for instance the idea of having only enough F-35Bs for a single air group and using the second ship as a home for marines and helicopters rather than a strike/fighter force. It has even been hinted that the second carrier might be sold to India.

However there is another way to seriously cut the cost of the planes which will fly from the new ships: that is, to fit catapults and arrester wires. This would mean that the UK could buy somewhat cheaper tailhook-version F-35C stealth planes; or much, much cheaper F-18 Hornets. The Hornet is the main jet currently in service with the US Navy and is still in production.

Provision of Catapult Assisted Takeoff But Arrested Recovery (CATOBAR) would also solve the great un-discussed issue of the new carriers - the same snag which, ignored in the Falklands, led to the almost crippling losses of ships and men suffered in 1982 and very nearly to the loss of the campaign.

Next page: The Earth is still round: You still see further from high up
Page: