The director of Apple's App Store appears to be a tasteless boor with a penchant for bestial flatulence and extended periods of exuberant wee-wee.

According to a Wednesday Wired report, the head of the App Store has dropped his own load of infantile scatology into what Wired, tongue in gagging cheek, describes as the "vast, steaming heap of inanity" over which he reigns.

And by stupid, we know of what we speak. When researching our May 2009 article, "iPhone apps - the 10 smartest and the 10 stupidest", we hacked our way through the vast wasteland of rank vapidity contained in the iTunes App Store in our quest to ferret out the stupidest of the stupid.

Shoemaker's apps would have fit right in. According to Wired, Shoemaker is the driving force behind GrayNoodle LLC, publisher of such ... well ... stupid apps as iWiz, Animal Farts, Blue Flame, and more.

The Reg pauses to assure you, dear reader, that we have no truck with those who would decry all forms of stupidity. We pride ourselves, in fact, on our ability to recognize and honor a well-played bit of foolishness, a flash of inspired — or inspiring — idiocy, or even a jaw-dropping display of unintelligable madness.

But doltishness has no value in our canon.

And so leaving entirely aside the fact that Shoemaker is the Sergeant of the App Store police and the possible improprieties of a developer of arguably überstupid apps being the gatekeeper of Apple's rigid "No Sex, Please: We're Cupertinian" propriety, let us instead examine three examples of his contributions to the App Store, including some of the fine marketing verbiage that accompany them. Stupid, or not stupid?

First, iWiz, an app that provides accelerometer-controlled audio of urination. Such fun!

By "accidentals", we doubt that Shoemaker intended a witty reference to the flats and sharps not stipulated by a musical composition's key signature. But we could be wrong. We're cynical that way. 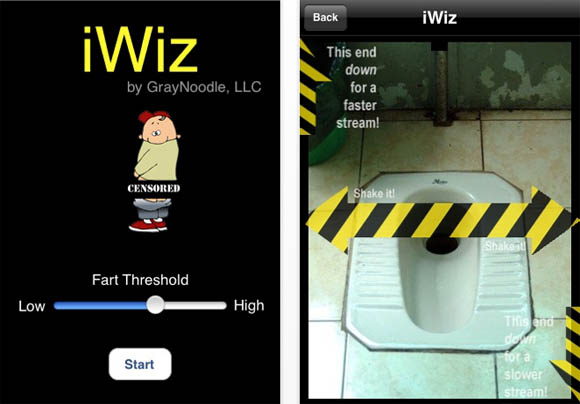 Tilt and swivel your device to control the stream — just like in real life!

Then there's the stunningly minimalist Animal Farts, in which the tap of a button releases a brown cloud over the nether regions of a crude animation. Oh, and a Wiz audio feature is also supported — let's not waste a good sound effect, eh?

Well, "scoff" is a distinct possibility, if not a response unique to Animal Farts. "Laugh", on the other hand, is a less-likely outcome. 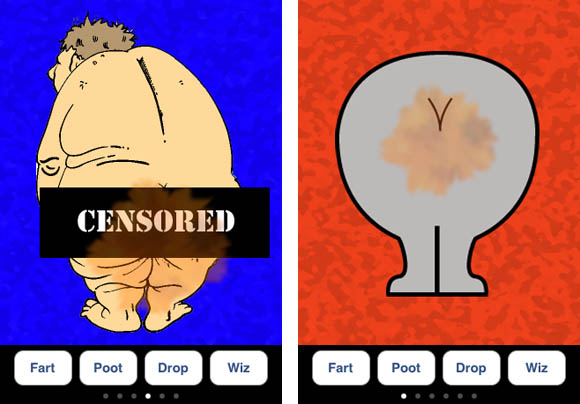 No, that tasteful left image isn't Wallace Shawn after his delightfully urbane Dinner with Andre

There are others in the GrayNoodle's stable of stupidity, but we'll stop with Blue Flame, an app — as near as we could tell, since we weren't about to blow a buck on it — that merely displays a blue flame.

Who knew that there was such fevered competition among stupid flame apps? And GrayNoodle is proud of its blueness — after all, they crow: "Why a blue flame? Well, we all know what a blue flame is."

And this guy is running the App Store police? That's stupid. ®