Dave TV has honoured Tim Vine with its Joke of the Fringe award - the annual celebration of the Best of Edinburgh quippery.

"Pun punditt" Vine beat off some stiff opposition with: ''I've just been on a once-in-a-lifetime holiday. I'll tell you what, never again.''

Eight comedy critics sat through "60 performances, totalling 3,600 minutes of comedy material", and selected 24 gags to go forward to a public vote. Here are the top ten which tickled the ribs of the hoi polloi: 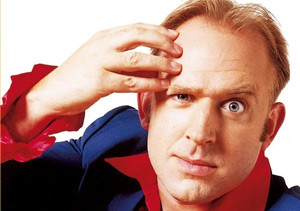 A chuffed Vine (pictured) said of the award: "I'm going to celebrate by going to Sooty's barbecue and having a sweepsteak."

One man who won't be enjoying a sweepsteak is last year's winner Dan Antopolski. Despite impressing in 2009 with "Hedgehogs. Why can't they just share the hedge?", this time around he found himself on the worst joke roster with: "How many Spaniards does it take to change a lightbulb? Juan."

Also named and shamed were Sara Pascoe ("Why did the chicken commit suicide? To get to the other side.") and Emo Phillips ("I like to play chess with bald men in the park although it's hard to find 32 of them.")

The Beeb has more here. ®