Gmail pushes onto the iPhone

Google calendar elbows in too

Google has enabled push email on the iPhone, so now received Gmail can interrupt iPhone users just as irritatingly as the native app supplied by Apple.

That limitation also applied to the iPhone's native mail app, at least until recently, which annoyed many users who wanted to keep their work and home email accounts separate. The new Gmail app is also restricted to one account, but combined with the native application it enables the user to receive pushed emails from two separate accounts into separate email clients.

The new Google Mobile App, already in the UK iTunes store, also accepts pushed Calendar events, and pops up reminders right across whatever it is you're trying to do: 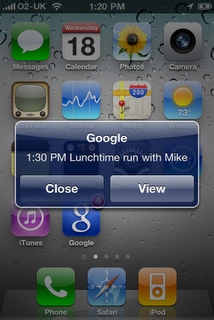 Those notifications still pop up right across the iPhone screen, to the intense irritation of anyone not already accustomed to the Jobsian way of doing things.

Google has also integrated some search features, as one might expect, but it's the pushy nature of the new client which is the major development, as explained by Google's blog. ®