Those of you who've been following our Paper Aircraft Released Into Space (PARIS) programme are invited to spare a thought today for Microsoft's Phoenix glider, which failed to demonstrate the Right Stuff over the weekend at Red Bull's Flugtag competition in Long Beach, California.

Flugtag "challenges teams of everyday people to build homemade, human-powered flying machines and pilot them off a 30-foot high deck in hopes of achieving flight!" as Red Bull puts it.

There was keen anticipation last week among the eight-strong Microsoft Windows Project Phoenix crew ahead of the big day. Team member Ben Rudolph kind of like told CNET: "This is kind of like the most Microsoft thing we could do. We took a team of smart guys and girls and we built this thing from scratch."

He added: "It's standing up. It actually looks pretty freaking amazing." 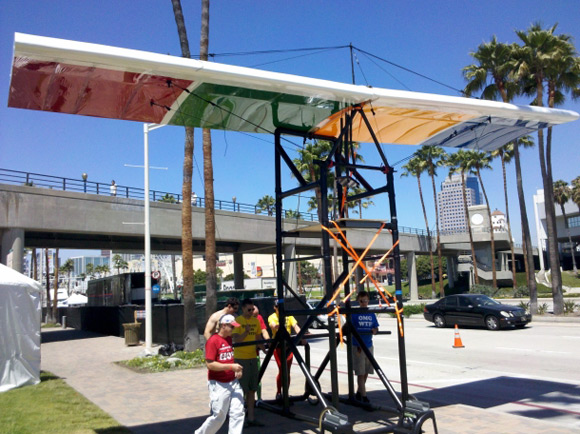 Rudolph wasn't able to offer a concrete explanation for the failure. He said: "The wings appeared sound, but perhaps the balance was off."

Of course, if Phoenix had been an Apple aircraft, Steve Jobs would simply have said the glider actually flew, and we would have believed him. ®