A US military competition aimed at finding a robotic unmanned helicopter able to haul supplies to isolated bases in Afghanistan has a winner, according to reports. 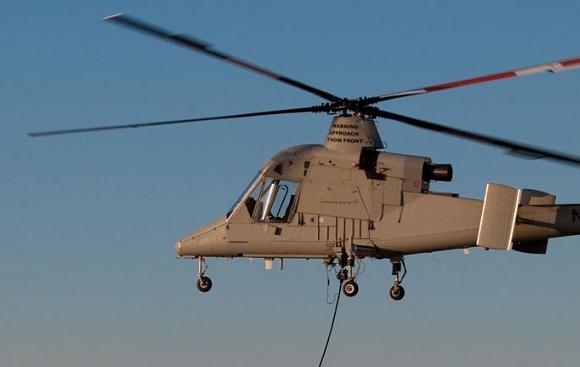 OK, flyboy, you go and have your mandatory aircrew sleep time - you've slept yourself right out of a job

The US Marines' "Immediate Cargo Unmanned Aerial System" compo has now been subsumed into an Army-run effort known as Autonomous Technologies for Unmanned Air Systems (ATUAS), and Aviation Week notes that a contract has been awarded to Lockheed Martin.

Lockheed's offering for the unmanned robocopter contest was an automated version of the existing Kaman K-MAX intermeshing-rotors manned aircraft, and it appears that this will now be developed into the US forces' first robot cargo skyhook.

The ATUAS K-MAX, in trials earlier this year, has shown that it can shift 3,000lb of cargo across 150 nautical miles in two flights within six hours - all without any input from ground operators other than specifying the destination and route. The machine is expected to offer the same performance, delivering cargo to a point within 10 metres of the target coordinates, even in weather which would ground a normal manned chopper. The K-MAX team has also shown off a nifty "four-hook carousel", which lets the droidcopter make multiple dropoffs in a single flight.

The only serious rival to the K-MAX was the A160T robocopter offered by Boeing: but this gave a less-impressive lifting performance in trials, and also lacks the option for manned piloting, which could prove useful for legal reasons in civilian-controlled airspace.

The ATUAS capability really could be good news in Afghanistan, where supplies need to go by helicopter as much as possible, and sometimes have to be rushed in urgently to forward bases which are under fire at the time. The need to keep air crews within their allowed operating hours, and the need to lift them and their associated things - armour protection for instance - makes manned helicopters very expensive and eats into their lifting ability. Furthermore manned cargo helicopters must normally be escorted by Apache attack choppers, a thing which would presumably be unnecessary with ATUAS.

Av Week reports that ATUAS may now reach the field at some point after 2011: the original plan by the Marines called for it to be in Afghanistan by the end of this year. ®