Now, a way to look even barmier in public

A mobile phone built into a black dress? Marvellous. And with pictures too? Hold the science page for this one, but don't look too closely.

CuteCircuit has announced a little black dress with a built-in mobile phone. It's all controlled with a wave of the arm and good to look at too. But while one might assume the announcement is just shameless self-promotion on the part of CuteCircuit the idea does warrant some attention - just not very much. 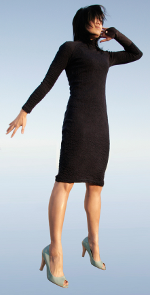 Ready for sale next year. Really.

Apparently the dress has a SIM slot under the label, and calls can be answered with a bend of the arm detected by the dress's "gesture-recognition technology" - best not to reach for a pen during the call. The same gesture is used to make outgoing calls, to a limited range of pre-registered numbers. The designer suggests one might be an operator who could then connect the call, but fails to explain how the wearer would select from even a limited range of options.

We've also asked about how the battery is hidden, not to mention the necessary phone circuits, but are still awaiting a response. CuteCircuit's other electronically-enhanced clothing can be washed at 30 degrees once the battery has been removed, so we'd assume the M-Dress will have the same facility.

CuteCircuit sells a range of dresses and tops with lights embedded in them, for Eurovision Song Contest entrants among others, but it's a long way from button-cell-powered LEDs to a mobile phone, and creating waterproof circuits for the latter is a challenge indeed.

Not that CuteCircuit is the first to embed phone functionality into clothing: Eleksen has been producing washable electronics for years, including Bluetooth-connected jackets, though it relies on old-fashioned buttons for interaction, and is a lot less sexy: 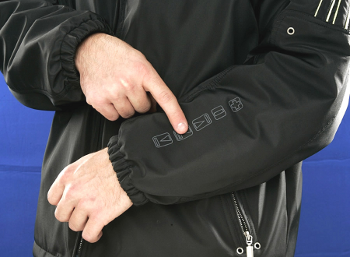 Eleksen's effort, hampered by having to be real

Mobile phones in clothing will come eventually, and Bluetooth in a dress isn't inconceivable, but a mobile phone embedded in a little black dress for 2011 - that's just good PR. ®

Let us pour you some of this CloudSpin juice, upstart says

Surfing the web from Android? We KNEW it – sorry, iOS fanbois

About time too: fandroids dominate in buying devices

Google, Mozilla both say they sped up the web today. One by blocking ads. One with ads

Guess which was which. Hint: Firefox now crushes trackers on Android

What is this, 2016? A rummage around in 7th-gen iPad innards shows repurposed tech within

Bigger case means we can use even more glue!