Review With a very plasticy shell and a rather odd rough texture both inside and out, the NB250 has a rather cheap feel to it.

It’s one of the few netbooks to make use of Intel’s Atom N455. Although very similar to the N450 - 1.66GHz clock speed, single-core, 45nm etc. - the N455 supports DDR 3 memory. With this in mind, Toshiba has included 1GB of DDR 3 memory, but there’s no noticeable improvement in performance. In fact, it fell slightly behind N450-driven netbooks in our benchmarks. 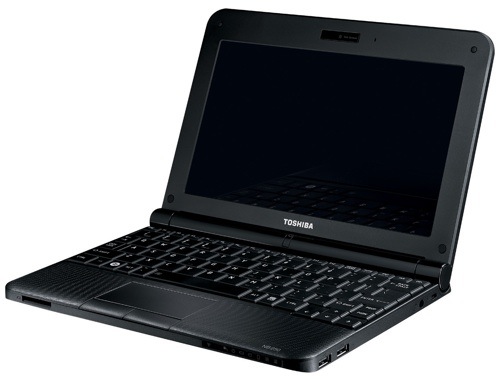 The Atom N455 also has a higher TDP: 6.5W compared to the N450’s 5.5W. This adversely effects battery life: the NB250’s 48Wh battery only managed 3h 42m, which is less than N450-based netbooks with a similar capacity battery. The battery also pokes out from the rear of the chassis by some way and wobbles slightly when the netbook is moved around, which isn’t particularly reassuring.

The keys have a bit of a rattle to them, which makes for noisy typing. And although the primary keys are large, those on the right side are shortened to a slither, so you can expect frequent wrong key presses here. The Start, Alt and Fn keys along the bottom row suffer a similar fate. The touchpad is excellent, though, with larger-than-average buttons.

During testing the NB250 got a little hot under the collar, with the wrist rest and left side of the keyboard both getting noticeably warm. And with just a single speaker, audio is also below par. 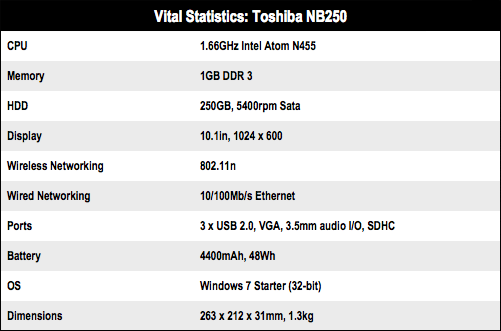