Jobs moves to the heavens with Apple TV

You rent from his cloud

Analysis With its Apple TV revamp announced Wednesday, Apple dipped its toes into the entertainment cloud — if you'll forgive a muddled metaphor. It's a tentative baby step, but expect more cloudy offerings from Cupertino if the experiment is a success.

Although iTunes has allowed you to either rent or buy movies for some years now, the new Apple TV is a rent-only affair. When introducing it, Steve Jobs claimed that the reason he was eliminating the ability for the Apple TV to buy movies and store them locally was for consumers' own good.

"[Consumers] don't want to manage storage. When you buy a bunch of movies and TV shows, you have to manage them because you don't want to throw them away — you just bought them," he told the crowd at the Apple TV's introduction. "And so you have storage-management problems."

Relying on the old adage that no one ever went broke by underestimating the intelligence of Average Joe and Average Jane, Jobs continued: "Your hard disk starts to fill up — what are you gonna do? People don't want to think about managing storage, they just want to watch movies and TV shows." 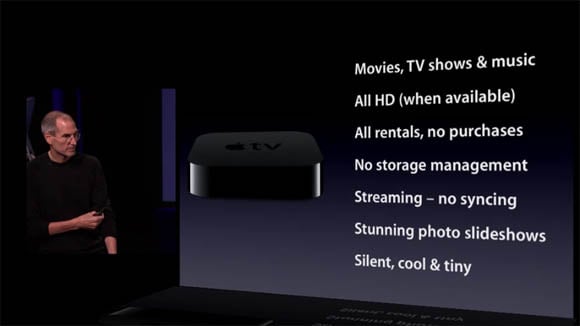 Steve Jobs will deliver you from the agony of storage management

And so he's eliminating Joe and Jane's need to manage those pesky files by not letting them have them in the first place — that is, of course, until some enterprising hacker figures out how to crack the Apple TV stream and capture the content.

But even if — when? — that happens, the number of J&Js who will engage in such nefarious behavior will be vanishingly small. They'll get their entertainment from the cloud and be happy about it — after all, if their local hard disk filled up with movies and TV shows, what on earth would they do?

The "rent, don't own" model for Apple TV is just the beginning — the $1bn data center that's nearing completion in North Carolina will be able to service far more than Apple TV streaming and MobileMe online storage 'n' sync.

Apple's next cloudy offering is almost certainly going to be the one that many pundits predicted would be announced at Wednesday's event: a music subscription or storage service. After all, consumers have multiple gigabytes of tunes on their computers, and when their hard disks fill up, what are they going to do?

It remains to be seen, however, how Apple will implement that service, seeing as how it has sold over 10 billion music files — both DRM-hobbled and DRM-free — since the iTunes Store fired up back in April 2003. We can think of a few possibilities from which Apple could choose:

We're betting on the latter, with the addition of 3G streaming to mobile devices. Apple could, of course, also choose to tier its monthly subscription fees by genre — say, $14.95 for all-you-can-eat or $3.95 per genre: classical, jazz, hip-hop, whatever.

But entertainment may not be the only cloud-based service that Apple has in mind. The "magical and revolutionary" iPad, for example, has only limited support for files created or used by its apps — and they must be moved to and from the tablet through a users' copy of iTunes.

If the iPad is ever to become more than a mere consumption device — and Apple appears to believe it should, considering the fact that it offers iPad versions of its iWork productivity suite's Keynote, Numbers, and Pages apps — it will need an easier way to store and share files, as well as one in which files can be accessed when a user is away from his or her home base.

The cloud would be the perfect place for a mobile app repository. Of course, Apple now offers a limited version of such a capability through its MobileMe service — along with rudimentary music streaming — and has launched a beta version of the file-sharing iWork.com.

But MobileMe is far from simple enough for the aforementioned Joe and Jane, as its iDisk is not accessible from within apps, and files need to be uploaded from a user's Mac to MobileMe, or to the apps through iTunes. iWork.com is a promising start, but it's still a beta, and it's available only to users of Apple's three productivity apps.

Apple needs to offer a way for files created and used by third-party iPad apps to be stored in the cloud if its magical and revolutionary tablet is ever to become a true productivity machine. Besides, today's iPads only have 16GB, 32GB, or 64GB of storage, and what's a user going to do when their flash drives fill up? ®