Apple has revamped three quarters of its iPod line. Or, more accurately, it upgraded one quarter, redesigned another, took a step back in time with a third, and left the final, not-even-mentioned quarter alone. 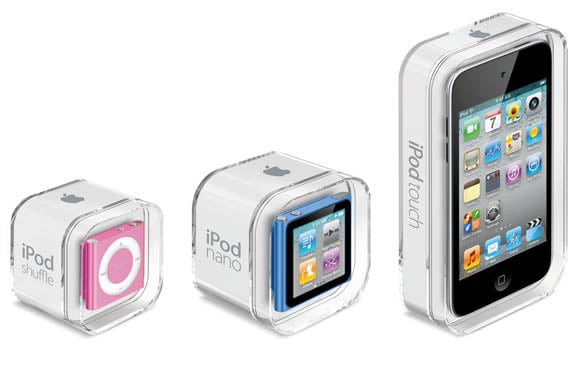 Daddy iPod classic missed the family photo session, drunk and depressed due to being ignored

On Wednesday, the new iPod touch retained its old iPhone 3GS look — although, at 7.2mm, it's noticeably thinner — but incorporated a number of iPhone 4 features. As Steve Jobs said in a statement accompanying the unveiling, "We've put our most advanced technology inside the new iPod touch."

That "advanced technology" is in the main borrowed from the iPhone 4, and includes the 326dpi Retina Display, a 720p HD video camera in the rear, VGA camera on the front, FaceTime videoconferencing over Wi-Fi, A4 processor, and three-axis gyro.

There's one iPhone 4–versus–iPod touch question we'd like to ask Apple, however — as if they'd ever deign to return our emails: the iPhone 4 lists its rear-facing still camera as a five-megapixel affair, while the iPod touch captures stills at a mere 960x720 pixels, which is just about 0.7 megapixels. Wassup?

That three-axis gyro is an incentive to developers to create more and better games for the iPod touch. And that's clearly something Jobs & Co want — the Apple CEO went out of his way in his Wednesday presentation to note that the iPod touch outsells Nintendo and Sony portable-gaming gizmos combined, and owns over 50 per cent of the portable-gaming market share, worldwide.