Following its oil spill in the Gulf of Mexico, BP went from spending about $57,000 a month on Google search ads to an enormous $3.6m outlay for the month of June alone, according to a report citing internal Google documents.

Documents obtained by Ad Age list BP as Google's sixth largest advertiser in June. Early that month, BP began purchasing ads for keywords such as "oil spill" not only on Google but on Yahoo! and Microsoft as well, pushing netizens to its "www.bp.com/oilspillnews" site, where they could, in the company's words, find "Info about the Gulf of Mexico Spill" and "Learn More about How BP is Helping". 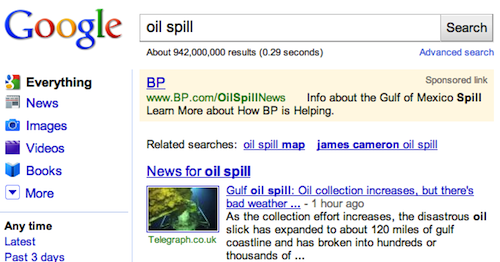